Egyptian Women Rally Around "The Girl in the #BlueBra" - Ms. Magazine
Skip to content

This week, the world saw just how brutal the Egyptian military can be towards women who dissent. A video, which has gone viral, shows military police dragging a hijab-clad woman protester through the street, beating her senseless, then stomping on her exposed stomach as she lies motionless in her blue bra. That image has become a rallying point for Egyptians, held up on signs by protesters chanting, “This is the army that is protecting us!”

Today, several hundred women gathered for a march to expose the military’s sexual violence against female demonstrators and demand a regime change. Activists used Twitter to organize the rally, with the hashtag #bluebra. Protesters carried pictures of women, elderly people and teenagers who had been beaten up by the police. Many men formed a protective circle around the women marchers so they could not be assaulted.

There is a reason why Time magazine picked The Protester as its Person of the Year–and there is a reason why the protester on that Time cover is a woman. Throughout the Arab Spring, from Iran to Saudi Arabia to Egypt, women have been on the frontlines of the protests, demanding more rights, as well as behind the scenes, shaping their countries’ revolutions. 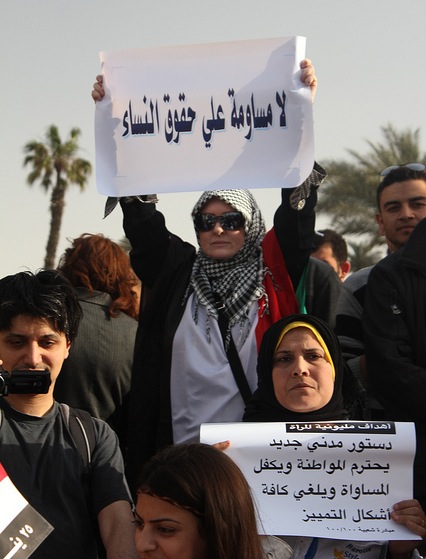 The problem is not getting women on the streets during these times of passionate protests, but getting them into the conversations that follow. It is after the euphoria fades, after the dictator is placed in custody, when the political blueprint of a country is being laid out, that women are nowhere to be heard.

We have seen this repeatedly. From Bangladesh’s ’71 War of Independence, to Iran in ’79, to Libya of 2011, to Egypt today, where are the women when it comes to forming the new government? Women have already been effectively shut out in the ongoing elections for Egypt’s lower house of Parliament.

Egyptian women’s march today is truly revolutionary, because it is a refusal to be sidelined from the process of determining their country’s future. They were and are a part of Egypt’s revolution. Social media and the Internet are women’s weapons to ensure that their protests will be seen and their voices will not be silenced.

If the image of the woman in her blue bra being stomped senseless on the streets of Cairo shows us anything, it is that, with the help of new media, this revolution is being televised, and the world is watching. Egyptian women are demonstrating that without women’s participation, no country can become a real democracy.

UPDATE: 12/21/11—The New York Times reports that Tuesday’s march was the most important demonstration by Egyptian women in nearly a century, with attendance in the thousands:

Historians called the event the biggest women’s demonstration in modern Egyptian history, the most significant since a 1919 march against British colonialism inaugurated women’s activism here, and a rarity in the Arab world. …

The protest’s scale stunned even feminists here. In Egypt’s stiffly patriarchal culture, previous attempts to organize women’s events in Tahrir Square during this year’s protests almost always fizzled or, in one case in March, ended in the physical harassment of a small group of women by a larger crowd of men.

“It was amazing the number of women that came out from all over the place,” said Zeinab Abul-Magd, a historian who has studied women’s activism here. “I expected fewer than 300.”