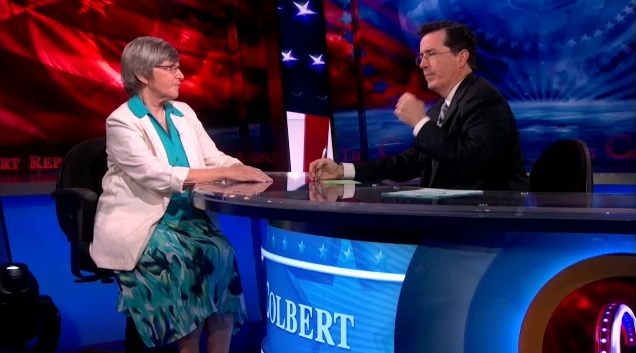 Catholic clergy have been pretty tough on American nuns lately, accusing them of “radical feminism.” As Ms. reports in our brand-new issue, the Vatican has issued a doctrinal assessment criticizing the nuns for aiding the poor and needy instead of spreading anti-abortion and anti-gay doctrine.

But the sisters have just met their harshest critic: Stephen Colbert (or at least, his ultra-right-wing comedic persona). Sister Simone Campbell stopped by The Colbert Report Monday night to explain why radical feminism might not be such a bad thing.

Sister Campbell serves as the executive director of NETWORK, a progressive social justice institute made up of Catholic nuns and lay people that was specifically targeted in the Vatican report for spending too little time fighting, in Colbert’s words, “the gay agenda.” NETWORK members, along with other nuns, will be setting off on a bus tour June 18 to call for support of Obama’s Affordable Care Act and its no co-pay contraception mandate. The tour will, in a very “radical feminist” way, counter the bishops’ upcoming Fortnight for Freedom—a 14-day period of prayer to challenge the contraception requirement.

Colbert and the Vatican might think that Campbell and her fellow religious sisters have “gone rogue,” but according to Campbell: “We’re certainly oriented toward the needs of women and responding to their needs. If that’s radical, I guess we are.”

Campbell proceeded to school Colbert on the surest ways to enter the kingdom of heaven (hint: not by amassing wealth).

Meanwhile, the Leadership Conference of Women Religious–which represents 80 percent of American nuns–meets with the Vatican on Tuesday to address the Vatican’s concerns about American nuns and their work. While preferring to ultimately reconcile with the Church hierarchy, the LCWR has made it clear that it is determined to fight these “unsubstantiated accusations.” As John Allen, Vatican specialist, reported, “Neither side is prepared to budge.”