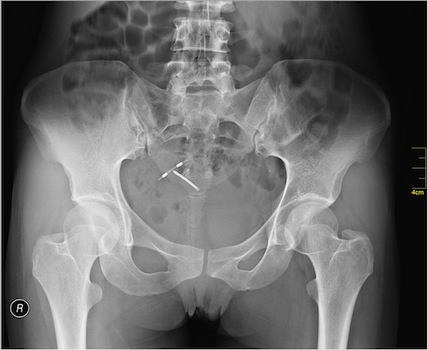 Imagine a world in which women trying to avoid unplanned pregnancies don’t have to worry about popping a daily pill that shoots their moods to hell, getting shots, buying condoms that sometimes break  or changing a patch. Imagine a contraceptive method with which 99 percent of its users report satisfaction. Sound like a dream?

In fact, this method–the intrauterine device (IUD) is the single most effective means to preventing pregnancy next to sterilization and is already available through your health-care provider.

What’s more, it may prevent cervical cancer. Still more? According to a study in the New England Journal of Medicine, women using pills, patches, or rings “had a risk of contraceptive failure that was 20 times as high as the risk” among those using IUDs.” Not enough? They require no upkeep or attention. One doctor described the IUD as the “set and forget” method. And while cost may have initially been a problem (the devices cost between $500 and $1,000 up front, but birth control pills, at $50-100 a month, are less cost-effective in the long-term), the recently-enacted Affordable Care Act, which covers IUDs, alleviates that substantial financial burden.

It’s not surprising, then, that a recent national survey shows that a rapidly increasing number of U.S. women are using the devices as their birth control method of choice. But that number remains startlingly low: a mere 8.5 percent of women choose the temporary implant.

Why? IUDs face a longstanding and well-warranted stigma, thanks to their first popularized version, the Dalkon Shield–a deadly device that killed 17 and caused 200,000 women physical injury, infections, miscarriages and hysterectomies.

The A.H. Robins Company sold an estimated 2.5 million Dalkon Shields in the 1970s, when nearly 10 percent of women using birth control were relying on IUDs. The company advertised them as a highly effective, moderately-priced means of preventing pregnancy, and aggressively marketed the product to teenagers in college, the underprivileged and women of color as a “population control” method of sorts.

Brochures describing the Dalkon Shield as “Designed for Greater Comfort” were actually promoting a product that had an ill-designed removal string that wicked bacteria into the uterus, facilitating Pelvic Inflammatory Disease (PID) and sepsis (blood poisoning) which, when untreated, can cause infertility. Any problems with the device were touted as the fault of doctors inserting it rather than the faulty design, which A.H. Robins knew about when it purchased the rights to the product, yet chose to ignore. One physician wrote to Robins, saying:

I have found the procedure to be the most traumatic manipulation ever perpetrated on womanhood, and I have inserted thousands of other varieties.

It was pulled from the market just three years later in the U.S., but the damage was done. More than 300,000 lawsuits were filed against the A.H. Robins Company, with the largest settlement amounting to 2.2 million. As a result of the hefty settlement payments, A.H. Robins filed bankruptcy in 1985.

Though it’s been nearly 40 years since the Dalkon Shield was distributed, its formidable reputation lives on: Today, 30 percent of health providers are still unconvinced that IUDs are safe for women who have never given birth, though the newest devices have proven to be so and are endorsed by the American College of Obstetricians and Gynecologists.

The new and improved IUDs are like iPhones compared to the telegrams of old. Two brands are available in the U.S., ParaGard and Mirena. The Mirena IUD, made of flexible plastic, lasts for up to five years and releases small amounts of the hormone progestin into the bloodstream. The ParaGard IUD, which contains copper, doesn’t use artificial hormones and lasts up to 12 years; it can be removed at any time by your gynecologist.

Both the ParaGard and Mirena affect the way sperm move, thus hindering it from fertilizing the egg. The copper in the ParaGard IUD is toxic to sperm, while progestin released from the Mirena IUD may also thicken the uterine mucus to further block the sperm.

The IUD isn’t perfect by any means: It still carries an elevated risk of PID compared to other contraceptive methods, but women who use no contraception at all have a higher risk of infection than women with an IUD. Also, insertion can be quite painful and the device does not protect from sexually transmitted infections, so sex outside of a monogamous relationship still demands a condom.

U.S. women are behind [PDF] the rest of the world in IUD usage: Thirty-five percent of Vietnamese and Egyptian women, 30 percent of Chinese women and nearly 20 percent of Scandinavian women use them. Only in sub-Saharan Africa is their a lower usage rate than in the U.S. But the last decade has seen a rise in IUD usage in America, increasing from 2.4 percent in 2004 to 5.6 percent in 2008. And doctors predict that, given the new safety measures and revamped design, use of IUDs will continue to increase.

Maybe it’s time to celebrate innovations in safe and effective birth control and give IUDs another chance.

From Iran, Solidarity With American Women

‘The People’s Lawyers’: Attorneys General Letitia James and Dana Nessel on Reclaiming and Rebuilding U.S. Democracy
Will There Be Violence if Trump Is Indicted? Notes on the Gendered Subtext
‘Guardians of Democracy’: Women Secretaries of State Defend Voting Rights and Election Security at the State Level