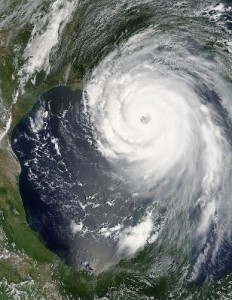 As Hurricane Isaac passed through New Orleans today, we couldn’t help think about what happened seven years ago when Hurricane Katrina wreaked extraordinary damages and losses on the Louisiana city. And when we think about Katrina, we can’t help but also recall how traditional media outlets depicted African American survivors as looters and “refugees” (thus ignoring their U.S. citizenship) after the storm.

But while prejudices of “race” and class played a significant role in how Katrina survivors were represented via traditional media, there was also a burgeoning community of women activists who were starting to tell the story of Katrina in their own words. And much of that was done online.

Two years ago, Marc Mayer, in his blog post “Social Media and Hurricane Katrina: What If?” reflected on the tragic events of Katrina and asked what would have happened if Twitter and Facebook had been as omnipresent as they are today. He wrote,

The year was 2005 and we were just on the cusp of social platforms roaring into our lives. If we would have been able to use Twitter and Facebook specifically, would that have helped pre- and post-emergency services? … Would social media have made a difference?

But though Twitter didn’t exist and Facebook wasn’t as ubiquitous, other forms of social media such as blogs enabled Hurricane Katrina survivors to author their own stories. Women survivors were hardly passive victims of media misrepresentation, but rather active participants in a subculture of  virtual volunteerism made possible by various online media platforms.

In early 2007, I began exploring online communities of women virtual volunteers during Katrina’s aftermath. The idea to look into these communities came from an assignment in a women’s studies graduate course on women and welfare, which eventually turned into a presentation that I gave at SUNY-Albany in 2008. During this time, I was also blogging and producing digital videos. I was drawn to the stories of women virtual volunteers because I was significantly affected by my experience as a volunteer  in Houston, Texas (see my video A Region of Survivors about my experiences volunteering two weeks after the storm). I was fascinated by the ways in which networks of women came together by way of online media to support each other during a crisis.

I witnessed virtual volunteers, some of whom were also survivors of Katrina, posting resource information and organizing clothing and food shipments using blogs, list-servs and Yahoo! groups. I primarily looked at three web platforms, including Real People Relief, Katrina’s Angels in Action Forum and Beyond Katrina, all created and maintained by women to directly support the needs of Katrina survivors across the country.

Leslie, creator and moderator of Real People Relief, considered the online platform a necessary means to participate in relief efforts given that, at the time, she lived in another region of the country and was physically unable to relocate to the Gulf Coast. She wrote,

I am a problem solver, a researcher and a networker. I am also disabled.  I may not be able to come down and get my hands dirty, but I can make it so more people can. I am now focusing my attention on the individuals who have fallen through the cracks of ‘organized relief’.

What I found most compelling about social media use among these women was that the founding of these platforms were a direct result of the lack of support from FEMA and/or from family members. These women not only used the platforms to exchange resources and information, but also found refuge in these online spaces. Women supported each other emotionally when it seemed as though their government and families had failed them after the most devastating natural disaster in modern U.S. history.

Though discussions about media misrepresentation of Katrina survivors dominated mainstream conversations, we can look to the experiences of women virtual volunteers as positive counter-narratives. In the coming days we may even learn about how new virtual volunteers have sprung up in the wake of Isaac and are once again helping their communities get through the storm.

Photo of Hurricane Katrina from NASA Goddard Photo and Video under license from Creative Commons 2.0