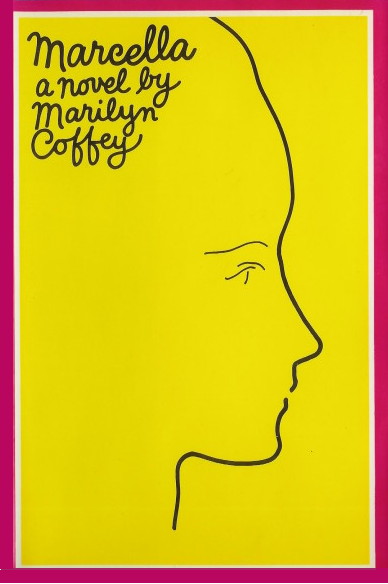 Award-winning poet and author Marilyn June Coffey is republishing her groundbreaking novel Marcella, 40 years after it made literary history in 1973 as perhaps the first English work of fiction to use female autoeroticism as a main theme.

Marcella tells the story of a young Kansas girl moving into womanhood during World War II. She discovers the private bliss of sexuality only to subsequently discover the “sinfulness” of self-pleasure, which brings on shame and self-punishment. She also learns that sexuality can become a force for abuse.

What inspired you to write Marcella?

My psychoanalyst. He asked me, “But have you ever tried to commit suicide?” And I remembered descending to the church basement (as Marcella does), selecting a knife and sawing at my wrists. That memory provoked the novel.

How did you expect Marcella would be received when you wrote the book in 1973? Were there any surprises?

I thought God might send down a lightning bolt and kill me. But He didn’t. The biggest surprise was the strong support from feminists. They lauded my controversial novel. Ms. published the menstruation chapter as “The Day Marcella Fell Off the Roof.” Gloria Steinem hailed Marcella as “an important part of the truth telling by and for women,” and Alix Kates Shulman praised the book in the New York Times Book Review.

What sort of effect do you think your book has had?

Varied. From a refusal to read it to “Thank you for telling my story.”

What kind of response do you expect for the republication?

Lisa Pelto of Concierge Marketing suggested that we offer Marcella to a Young Adult audience. This surprised me, since in 1973 my audience consisted of adults. Then I considered the sophistication of today’s young adult reader compared to her counterpart 40 years ago. I’m sure that today’s young reader is so much more savvy about sexual matters that my book wouldn’t shock her. So I think my audience for Marcella will broaden.

I understand that in 1989 you attempted a public reading which was eventually canceled after public outcry. Since you are once again planning a public reading [October 6–see below], I’m wondering how the response has been different and why you think that is.

I think the response to this year’s reading is largely different because of place. Omaha, Neb., is a sophisticated city that supports the arts and wouldn’t attempt to ban our marathon reading. But in 1989 I had agreed to read a marathon in Orleans, Neb., population 400, in my home county of 4,000. I love my roots, but sophisticated they are not. My Orleans reading was initially accepted, but when word spread about its descriptions of mas-tur-ba-tion, a brouhaha erupted.

How do you see reactions to your book and to public readings as relating to today’s War on Women by the extreme right?

Do you see parallels between Marcella’s pedophile minister and pedophile priests of today?

A pedophile is a pedophile whether in Marcella’s day or now. But today children are taught to speak out about behavior that makes them uncomfortable. That has caused, as you know, a tremendous outcry against pedophilia.

However, Marcella thought that the sexual experience with the minister she trusted was her fault, not Big Jim’s. Who could she speak to? No one.

The Internet has coached us to expect many responses from readers, But I received very few letters in response to Marcella. They were laudatory. The response I valued most was from a woman who saw me in an art gallery. When she read my name tag, she cried out, “Oh, are you the Marilyn Coffey who wrote Marcella?”

Marcella will be released by Omega Cottonwood Press in 2013.  A public marathon reading of the novel will be held Saturday afternoon, October 6, in the Benson Public Library, Omaha, Neb.

Coffey’s new collection of tart poetry from the 60s, Pricksongs, will also be republished in 2013. It will include her Pushcart Prize-winning poem, “Pricksong.” Coffey’s most recently published book is an adult biography, Mail-Order Kid: An Orphan Train Rider’s Story.

Supreme Court Displays Contempt for Women’s Rights in Unprecedented Decision
President Biden Condemns Supreme Court Decision: ‘This Is Not Over … Roe Is on the Ballot’
‘A Whole Generation of People Who Don’t Know How To Take Care of People’: Training Ob-Gyn Medical Residents In a Post-Roe World