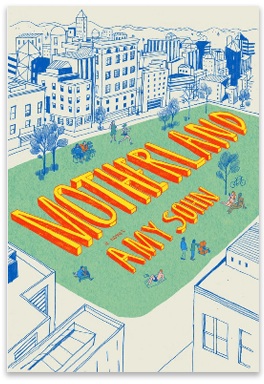 In Motherland, Amy Sohn offers a satirical, cynical look at life among the latte-sipping, Bugaboo-pushing parents of Brooklyn’s Park Slope. The novel, Sohn’s fourth, gets its title from the name one resident gives to this “land of child rearing, and nurturing, and nonstop care,” but Sohn’s six interwoven narratives reveal parents far more concerned with their own sexual fulfillment than with their children or, really, anything else.

Well-educated and well-heeled, Motherland‘s main characters struggle with the realities of their relationships post-baby. Rebecca is hiding the fact that her second child is not her husband’s. Marco rebels against his husband’s decision to adopt a second son by turning to alcohol and random hook-ups arranged via a gay dating app. Danny flies to the West Coast to shop his screenplay, but behaves as though he’s auditioning for a new life without his wife and two sons. Karen takes up with an ex-con (perhaps the only redeeming character in the book) after her husband leaves her for Valentina, a transsexual sex worker. And Melora tries to resurrect her fading Hollywood career with a run on Broadway, rediscovering her youth with the help of an unorthodox older lover and his daughter.

But, for a book called Motherland, there’s surprisingly little here about being a mother. For one, these Brooklynites are generally too busy complaining about their partners and planning their adulterous liaisons to spend much time with their children or even think much about them. The only scene in the novel that focuses on a parent-child interaction comes early on and involves a little boy nearly drowning while his father is distracted by a toned woman in a bikini. Sohn offers us vague mentions of co-sleeping and extended breastfeeding, but the only character whose concern with children actually seems to influence her actions is Helene, a long-time Park Slope resident whose annoyance at the colonization of her neighborhood by families with kids prompts her to start stealing strollers as an act of rebellion. Sohn also introduces us to Sonam, Rosa and Suzette, the nannies the families employ to care for their children, but we find out little about them; ultimately, she dismisses them as quickly as the parents do. Placing children, their caregivers and motherhood in the far background of her story keeps Sohn from offering much real insight into what it means for so many women to try to balance parenthood, career and relationships.

More problematic, though, is the fact that the women of Motherland not only don’t have it all, they don’t seem to have much. With occasional coffee and wine dates standing in for meaningful relationships, work or even hobbies, Sohn’s characters are bleak, self-absorbed caricatures of contemporary women. Rebecca owns a vintage children’s clothing shop, but it seems more an avocation than a job. Indeed, she closes the shop to suit her schedule, and business doesn’t really pick up until she uses the child support she receives from her son’s celebrity father to grow her business. Karen, meanwhile, is short on money, but is advised by her divorce lawyer not to put her M.S.W. to work until after her settlement works out. Melora, a grown-up child star, is the only woman in the book with a career to speak of, though, like Karen, she doesn’t seem to have a single friend in her peer group. Rebecca, the least likable of the bunch, does have friends, but she overlooks critical problems in their lives because she is so fixated on her own. Unlike most mothers, these women don’t have to worry about balancing home and career because they don’t really have anything to balance.

More concerned with celebrity and casual sex than substantive issues, Amy Sohn’s Motherland doesn’t contribute much to the conversation of what it means to be a mother today. Sohn’s skill as a writer will draw you into her story, but, in the end, Motherland is a place you’ll want to move on from soon after visiting.