Women Are Animals Too, PETA - Ms. Magazine
Skip to content 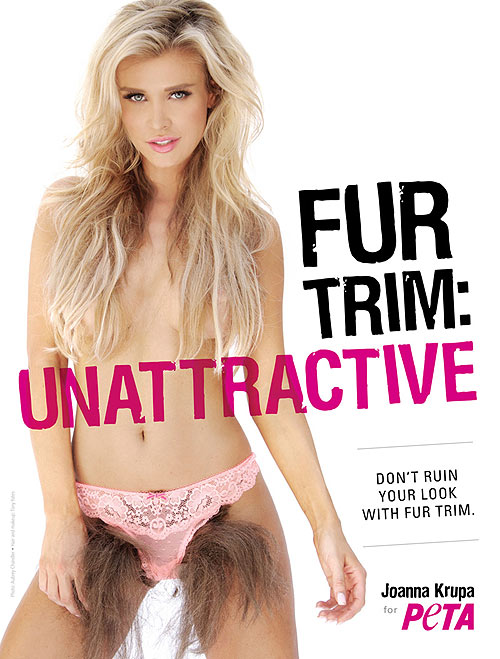 I love animals, but sometimes I really dislike PETA. The organization has become more consumed with garnering publicity and money and doesn’t seem to care how much they offend people. (We’re animals too, you know?)

The latest in what has been a long string of questionable ad campaigns by PETA features Dancing with the Stars‘ contestant, Playboy model and Real Housewives of Miami cast member Joanna Krupa. In the photo, she joins the likes of Pamela Anderson and Holly Madison by going nude for the cause, this time standing topless with fake fur taped to the gusset of her underwear next to a tagline that reads, “Don’t ruin your look with fur trim.” This isn’t even the first or second time Ms. has had to call out PETA for running an ad demeaning women for their body hair.

This is Krupa’s third nude ad for PETA that speaks out against wearing animal fur. When she’s not nip-slipping in front of the paparazzi or getting into Real Housewives brawls that are more choreographed than … well, her DWTS routines, she likes to pose naked for PETA because she thinks wearing fur is atrocious. I can agree with her and PETA on that one, but I have a problem with them using body-shaming as the butt of this jokey ad. Out of all the clever slogans the creatives at PETA could have whipped up, they had to promote one that degrades women for their natural appearance. The pressure to have a perfectly shaved everything is just another way society tells women that, in addition to changing your breasts, hair, lips and skin, they aren’t desirable unless they’ve been modified in some way.

That’s why women are pressured to waste time and energy plucking, waxing, lasering or, in extreme cases, altering their vaginas surgically so they can maintain the approved prepubescent look. It’s also why young girls are increasingly more likely to have a negative body image, as the list of “improvements” expected of them grows.

Shaving it all off should be a matter of personal choice, not societal preference. PETA shouldn’t compare having pubic hair to something as revolting as wearing a dead animal’s fur.

I want to believe PETA is better than this, but the evidence of their other campaign ads points to maybe-not-so-much. In the quest for self-promotion and more donations, they have no qualms about using sexist tropes to get attention, even if the cost of running such campaigns distracts from directly advocating for animal rights. PETA euthanized about 97 percent of the dogs and cats impounded in their shelters in 2011, an outrageous figure. Today’s PETA should return to its ’80s heyday when the focus was actually on the animals they wanted to protect, not on sexist, exploitative stunts. Until then, my support is going to be heading to the ASPCA or The Humane Society.

In their fight against the commodification of animals, PETA shouldn’t sacrifice the ethical treatment of women’s bodies.

No Comment: Lush Protests Torture of Animals with Simulated Torture of Woman

No Comment: PETA Doesn’t Want You to Wear Your Own Hair, Either