The Supreme Court has leaned conservative since the mid-1980s, when William Rehnquist became chief justice and Antonin Scalia was added to the court. The court moved further to the right when civil rights hero Thurgood Marshall was replaced with archconservative Clarence Thomas, but the presence of one or more swing justices in the middle—Kennedy and Sandra Day O’Connor—has provided a mediating influence on the more conservative justices. This mediating influence has been key in the areas of women’s reproductive rights and LGBTQ rights, where these moderate justices provided critical votes to uphold and in some cases extend the right to privacy—the constitutional guarantee that has provided the legal scaffolding for a woman’s right to seek an abortion in Roe v. Wade (1973) and, more recently, the right of same-sex couples to marry in Obergefell v. Hodges (2015).

With the retirement of Kennedy, that center is gone. 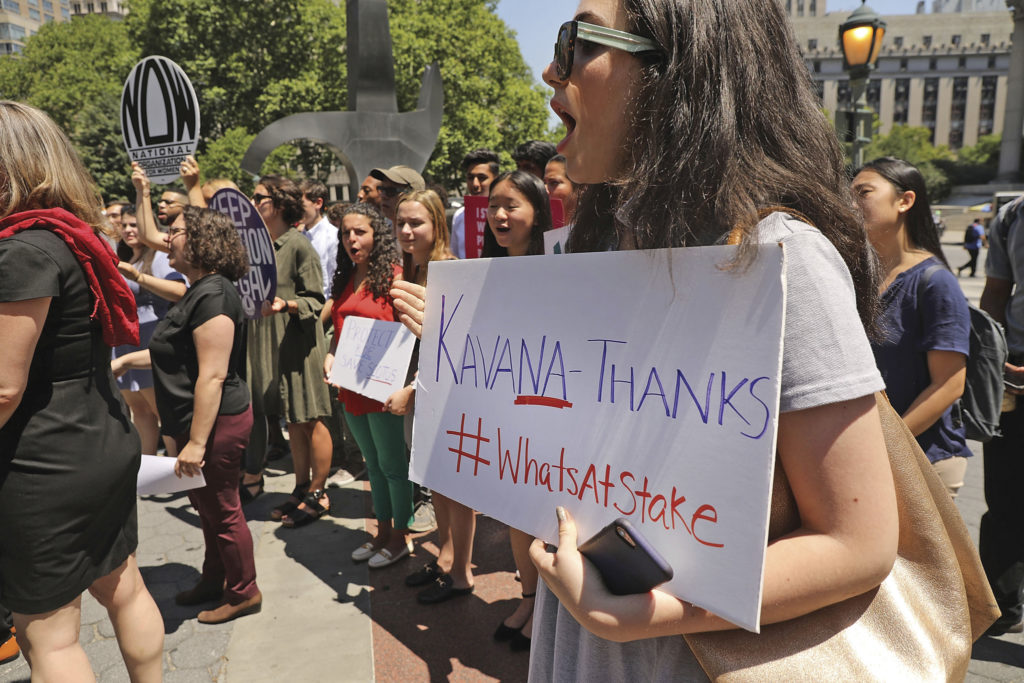 As NAACP Legal Defense Fund president and director-counsel Sherrilyn Ifill said on MSNBC, “the stakes are as high as they can possibly be” for women, for civil rights groups and for our democracy. While Supreme Court nominations spark media coverage, fanfare and political mobilization, nominations to the lower federal courts—where the bulk of federal litigation is actually resolved—are perhaps more important for the long-term direction of the law and rights in this country.

Like nominations to the Supreme Court, lower federal appointments are also for life. Because of the Mitch McConnell-led obstruction to President Obama’s judicial appointments, including the nearly yearlong refusal to even schedule a hearing on his nomination of Merrick Garland to fill the vacancy on the Supreme Court left by Justice Scalia’s death, Trump inherited an astounding 112 judicial vacancies. This is more than twice the number Obama inherited from George W. Bush; Trump and Senate Majority Leader Mitch McConnell have hurried to fill them.

According to a recent report released by the minority members on the Senate Judiciary Committee, “President Trump and Senate Republicans have been rushing nominees through the Senate at a breakneck pace by changing the process for consideration and eliminating traditions that had been followed for over a century.” The report says that nominees have been approved “even when they lacked support of home-state senators, did not have necessary legal experience, held views far outside the mainstream or were rated unanimously ‘not qualified’ by the American Bar Association.”

Many of these federal court appointees share involvement and membership in the Federalist Society for Law and Public Policy Studies, a powerful conservative legal network that has had de facto control of Supreme Court and lower federal court judicial appointments in the George W. Bush and Trump administrations. Both Kavanaugh and Neil Gorsuch, whom Trump nominated to the Supreme Court shortly after becoming president and the Senate quickly confirmed, are Federalist Society members, as are Justices Clarence Thomas and Samuel Alito and Chief Justice John Roberts.

Through almost two years of the Trump administration, the Federalist Society’s influence on judicial nominations appears to be even more powerful. It has been widely reported that Federalist Society executive vice president Leonard Leo put together Trump’s famous list of 25 potential Supreme Court nominees, hand-selected Gorsuch for Trump and has taken leave to advise the president throughout the nomination and confirmation of Kennedy’s replacement. Under Mitch McConnell’s leadership, the Senate has helped the Federalist Society and its executive VP, Leo, exert influence throughout the process, sidelining traditional mechanisms of judicial selection, vetting and procedure in order to push these judges through, especially in the lower federal courts.

While Kavanaugh will likely deny, demur and almost certainly refuse to answer any questions about how he would rule in cases of interest to women’s and civil rights supporters, his judicial track record on the D.C. Circuit Court of Appeals should not inspire confidence. Since his appointment by George W. Bush in 2006, Kavanaugh has sided with the government to deny a 17-year-old immigrant an abortion, sided with religious organizations claiming the right to deny contraception to women employees, embraced an expansive view of the Second Amendment that would erect serious barriers to common-sense gun regulation, favored deregulating corporations, and in his scholarly work, argued that a sitting president should have “absolute discretion” over whether to appoint a special counsel and should not be subject to civil lawsuits or criminal investigations.

Although strategically linking himself to Kennedy’s legacy by virtue of being his former law clerk, dyed-in-the-wool Federalist Society member Kavanaugh is likely to side with his brethren on most issues. The nomination of Kavanaugh, when understood within the broader historical and political context, is about more than simply resisting the appointment of another conservative ideologue to the Supreme Court. Scores of women’s, civil and workers’ rights, LGBTQ and civil liberties groups are opposed to his confirmation.

What’s at stake is the intentional and calculated remaking of the federal judiciary to reflect the views of a powerful elite minority in this country. Federalist Society judges, once appointed, will be in a position to resist the will of the majority for 20, 30 or even 40 years.

Women have every reason to take a stand—not just against Kavanaugh, but against the broader coup his nomination symbolizes.

Amanda Hollis Brusky is an associate professor of politics at Pomona College and author of the award-winning book Ideas with Consequences: the Federalist Society and the Conservative Counterrevolution.