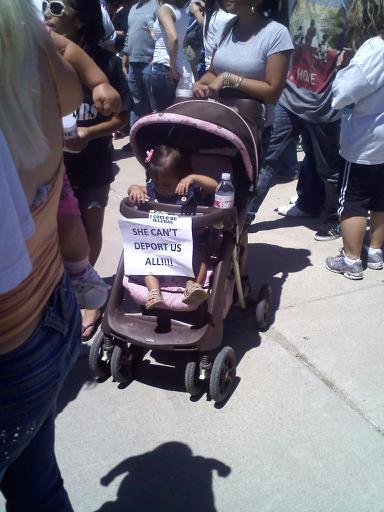 On the heels of controversial immigration law SB 1070, which allows police to detain anyone suspected of being an illegal immigrant, Arizona’s legislature has passed a law targeting ethnic studies programs. The bill, which bans these programs because they supposedly teach “ethnic chauvinism”, represents another misguided effort by Arizona’s policymakers.

As a professor of gender and women’s studies and ethnic studies in the state, I am very disturbed that people don’t know the difference between a field of intellectual inquiry and racial separatism. In these academic fields, to
paraphrase my colleague Dylan Rodriguez, we teach practical and theoretical texts–addressing questions of power, social movements, freedom, liberation, community, culture, inequality and history. Our scholarly commitment is reflected in what we teach, what we write and how we empower students to imagine a world that is better for all of us.

Where Tom Horne, superintendent of Arizona schools, sees “ethnic chauvinism and racial resentment toward whites while segregating students by race,” I would argue that ethnic studies promotes the exact opposite. It encourages all who enter the classroom to think critically about the ways in which race, gender, sexuality, social class and inequality structure our daily lives. We provide students with the tools to overcome and change these inequalities for the greater good of society.

If ethnic studies were about teaching racial separatism and the hatred of Anglo-Americans, I don’t think the University of California, Berkeley, or the University of California, Riverside, would offer doctoral degrees in this area of specialization, nor would Yale University offer a doctoral degree in African American studies. My own department at the University of Arizona offers a Chicana/Latina studies concentration within the gender and women’s studies major, recognizing the contributions of Chicana/Latina feminists who have transformed the ways in which we study gender, race and sexuality. Yet state officials such as Horne and  Gov. Jan Brewer find making such a distinction–between chauvinism and critical thinking–too difficult; or, rather, they intentionally conflate the issues to fuel the climate of fear.

To outsiders, the immigration and ethnic studies bills may seem baffling. Why Arizona, and why now?

In truth, Arizona has a long history of displacing economic fears upon marginalized people of color. During the 1870s and 1880s, then-Governor Anson Safford claimed that indigenous groups such as the Apaches (who were at war with the U.S. government) were an impediment to capitalist growth. He dedicated state resources to a final genocidal push to force Apache communities onto reservations, which culminated in such brutality as the notorious 1871 Camp Grant Massacre. Ironically, the Apache wars may have been the only thing buoying Arizona’s fledgling economy: Once the wars ended and the railroads came to Southern Arizona, the state sunk into a decade-long depression.

History may repeat itself; I fear that the results of these contemporary laws will only push Arizona into a further economic state of crisis. The truth is that Arizona is in bad shape. The median income for a family of four is appalling ($46,693), so it is no wonder that the borderline poverty of the average Arizona family is displaced onto the supposed deviant body of the undocumented. In addition, 40 percent of single family homes in Tucson are underwater (the owners owe more on their mortgages than the house is worth). The percentages for Phoenix are even higher. People are scared, uninformed and disenfranchised, feeling helpless about the economic future of the state for their children. With the passing of the immigration and ethnic studies laws, we are seeing that fear materialize, directed at Mexicans and other Latino immigrant groups–who are seen as illegal no matter what their actual legal status–instead of holding accountable the state that has forsaken us.

Yet these laws will backfire. In a state that is already bankrupt, with no money for education and social services, why support a law that could overtax law enforcement? Why put poor people in overcrowded jails? Why provoke boycotts of Arizonan goods and services across the nation  and the world? It does not make sense. Use my tax money to educate the youth of this state, not to create xenophobia, divide communities and further poverty by driving business away.

There is another side to this story that we can’t forget: one in which people have consistently fought repression in the state of Arizona, from the sanctuary movement that gave refuge to Central Americans pushed out of their countries because of U.S. military intervention in the 1980s, to No More Deaths and Border Action Network and Derechos Humanos, who work for human rights as the rights of all. This community of consciousness turned out by the thousands on May 1st in Tucson, standing against SB 1070.

I ask us to continue this tradition and make a new history for Arizona, one of solidarity.

So I stand in solidarity with the brothers of Alpha Pi Alpha, the oldest Black fraternity in the U.S. (founded at my alma mater, Cornell University) who had the pluck and political sense to pull their national conference out of Scottsdale in opposition to legislated racial profiling. I stand in solidarity with Officer Martin Escobar of the Tucson Police Department for taking a stand against SB 1070 by filing a federal suit against the state over the law’s enforcement.

I stand in solidarity with the American Immigration Lawyers Association, which is boycotting the state of Arizona by pulling their annual conference from the state. I stand in solidarity with Sonora, Mexico, whose governor, Guillermo Padrés Elías, canceled his meeting with Gov. Brewer as a symbolic protest against a law that could destroy the fabric of transnational relations and business between Arizona and Sonora.

I surprisingly stand in solidarity with the owner of the NBA basketball team Los Suns/The Phoenix Suns, along with his coaches and players, who had the courage to stand up for Latino people and those against SB 1070. And I stand in solidarity with the cities of Tucson and Flagstaff, which filed lawsuits against the state of Arizona. Their leadership has proven that we can make a change by voicing our dissent.

We need to invest in the future of Arizona by donating time, energy and money to local organizations (like some of those above) to fight the good fight and show that we can triumph over racism. We need to fund education, not bankrupt the state with racial profiling. And we need  to stop misunderstanding ethnic studies as a field of intellectual inquiry. There has to be something better than this current atmosphere of suspicion and hatred.

ABOVE: Photograph by the author of May 1 pro-immigrant rallies protesting SB 1070 in Tucson, Ariz.