True Blood Cast Gets Sexy And Bloody-Remind You of Anything? - Ms. Magazine
Skip to content 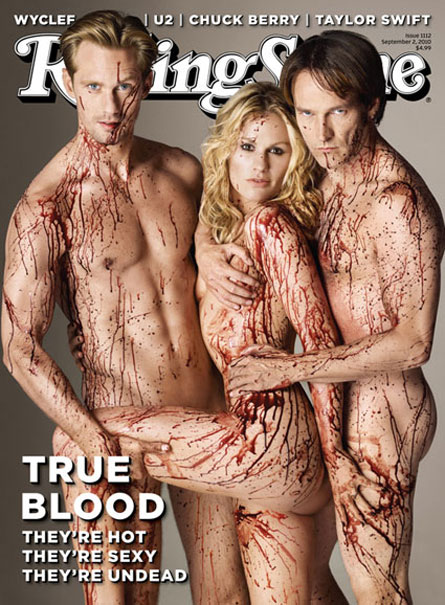 My first thought on seeing this Rolling Stone cover, featuring cast members from the vampire TV show True Blood, was “I wonder if Anna Paquin had her period when they shot this?”

Yeah, I went there. I know this is a show about vampires–and vampires who really get around, at that–making this sexy, bloody cover shot very appropriate. But I also think this photo has the potential to challenge dominant cultural ideas about “tainted” bodies, sexuality and menstruation. In addition to making some folks really uncomfortable.

Menstruation is most often constructed as a “curse” in Western societies, or at least a massive inconvenience and definitely an embarrassment should anyone find out you’re on your period. The menstrual taboo in film and television is palpable, and any reference to a woman having her period is comical, gross or an explanation of her bitchiness (is it that time of the month again?).

But what does this have to do with the Rolling Stone cover? Clearly the blood and nudity here are in reference to vampires, blood sucking and the hyper-sexualized nature of the show. But what strikes me about this photograph is the unabashedness with which blood and sexuality come into contact. Most often in popular culture, the only images of naked people we see are in sexual situations (other possibilities include naked people bathing and as babies). And because sex + menstrual blood = an absolute no-no for mainstream media, then blood and naked bodies–especially women’s naked, bloody bodies–are not likely to appear together.

So when I saw the True Blood cover I was surprised and a little thrilled. I knew I was supposed to be seeing sexy vampire stuff, but immediately I started to think about other situations in which you might be naked and bloody. And what did I come up with? Period sex. Which is an even bigger taboo than menstruation itself.

The separation between sexuality and menstruation is almost maniacal, though that may be changing. Clinical psychologist Ros Bramwell argues that the sexualized nature of the vagina contributes to the strength of the menstrual taboo and creates an inherent embarrassment around menstruating in sexual situations. Women’s sexualized bodies are public, their menstruating bodies–tainted. And never the twain shall meet.

And that brings me to why I think this cover is so fantastic. Though Anna Paquin (likely) isn’t menstruating in this photo, we are seeing blood, sex and bodies in the same frame, forcing us to consider the mingling, seeping and blending of these very human things. If we can look at these sexy, naked actors covered in blood and still think they’re damn fine, we’re one step closer to getting over the menstrual taboo and taking part in the joys of loving our girlfriends while they’re bleeding.

Our Abortion Stories: Shamed Into Silence, ‘We Weren’t Fit To Become Mothers’
40 Percent of Single Moms Face Food Insecurity. The Fall of Roe Will Plunge Them Deeper Into Poverty
Her Ex-Husband Is Suing a Clinic Over the Abortion She Had Four Years Ago