10 Years of "Feminism is for Everybody" - Ms. Magazine
Skip to content 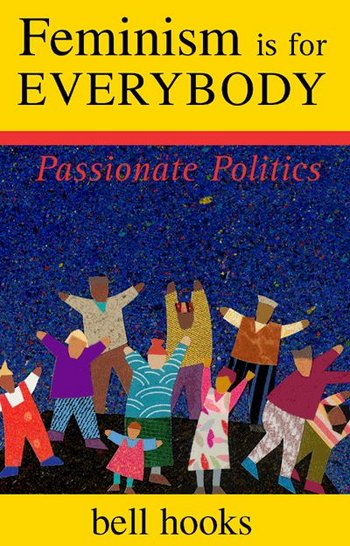 At the dawn of this new millennium, bell hooks published Feminism is for Everybody: Passionate Politics, a slim, bright-yellow book with a powerful goal: to introduce feminist politics in an accessible format in order to reach the widest possible audience. She begins with a story of how proud she is to talk to everyone she meets about feminism and how surprised people are when they hear what it’s all about. “They are quick to tell me I am different,” she writes, “not like the ‘real’ feminists who hate men, who are angry.”

Every time I leave one of these encounters, I want to have in my hand a little book so that I can say, read this book, and it will tell you what feminism is, what the movement is about … From the moment feminist thinking, politics, and practice changed my life, I have wanted this book. I have wanted to give it to the folk I love so that they can understand better this cause, this feminist politics I believe in so deeply, that is the foundation of my political life.

This “little book” quickly became a feminist classic. I’m sure I’m not the only Gender Studies professor who teaches it on a regular basis. My students love it, and they relish the simple, clear definition of feminism bell hooks provides (which she first formulated 10 years earlier in Feminist Theory: From Margin to Center):

Feminism is a movement to end sexism, sexist exploitation, and oppression.

One thing that usually clicks in a big way for first-time readers is bell hooks’ opposition to what she calls “lifestyle feminism,” or, the “notion that there could be as many versions of feminism as there were women.” By emphasizing the isms rather than the ists–feminism versus sexism–she cuts through the cluttered thinking that leads to absurd finger-pointing about who gets to call themselves a feminist.

Here’s what she says about reproductive rights and feminism:

If feminism is a movement to end sexist oppression, and depriving females of reproductive rights is a form of sexist oppression, then one cannot be anti-choice and be feminist. A woman can insist she would never choose to have an abortion while affirming her support of the right of women to choose and still be an advocate of feminist politics. She cannot be anti-abortion and an advocate of feminism.

It’s that simple: Feminism stands opposed to oppression. If you’re not down with that, you’re against it, no matter how many times you try to rebrand the word by taking it out of context.

Feminism is for Everybody provides an excellent introduction to the idea of interlocking systems of oppression. Patriarchy reinforces other oppressive systems, such as racism, classicism, imperialism, homophobia–systems in which one group dominates over and seeks to control another. The book could benefit from a discussion of transgender rights and working to break down the gender binary; however, the anti-oppression stance bell hooks presents applies directly to transgender politics. Feminism cannot be aligned with transphobia.

In considering what’s changed between 2000 and 2010, I wish I could say that everything bell hooks wished for in this book had come true. The recently released Pew Research Center Global Attitudes Survey on gender headlined the finding that gender equality is now “universally embraced”—as an ideal, that is—and in some countries more than others.

[D]espite a general consensus that women should have the same rights as men, people in many countries around the world say gender inequalities persist in their countries. Many say that men get more opportunities than equally qualified women for jobs that pay well and that life is generally better for men than it is for women in their countries. This is especially so in some of the wealthier nations surveyed. And while majorities in nearly every country surveyed express support for gender equality, equal rights supporters in most countries say that more changes are needed to ensure that women have the same rights as men.

So while feminism is, indeed, for everybody, much work still needs to be done.

Among the wishes bell hooks expresses in the book is a desire for an ongoing public relations campaign to promote feminist politics in a multiplicity of contexts.

There should be billboards; ads in magazines; ads on buses, subways, trains; television commercials spreading the word, letting the world know more about feminism.

She writes about wanting to see a feminist college, textbooks for grade-schoolers, and TV and radio stations dedicated to advancing the cause of feminism. I met a woman this week who told me that her 11-year-old son chose to study feminism in school, and I was filled with hope for the future. Children ought to learn about feminism. Perhaps one day it will be a standard part of the curriculum.

The growth of the feminist blogosphere has certainly been a positive development over the last decade. Anyone with access to the Internet can now read about and participate in feminist discussions and analysis. The Blogroll on the right-hand side of the Ms. Blog homepage lists our favorites. Everybody should check out these sites and get involved.

In Feminism is for Everybody, bell hooks invites us to consider a world in which feminism has achieved its goals:

Read this book, and dream big!