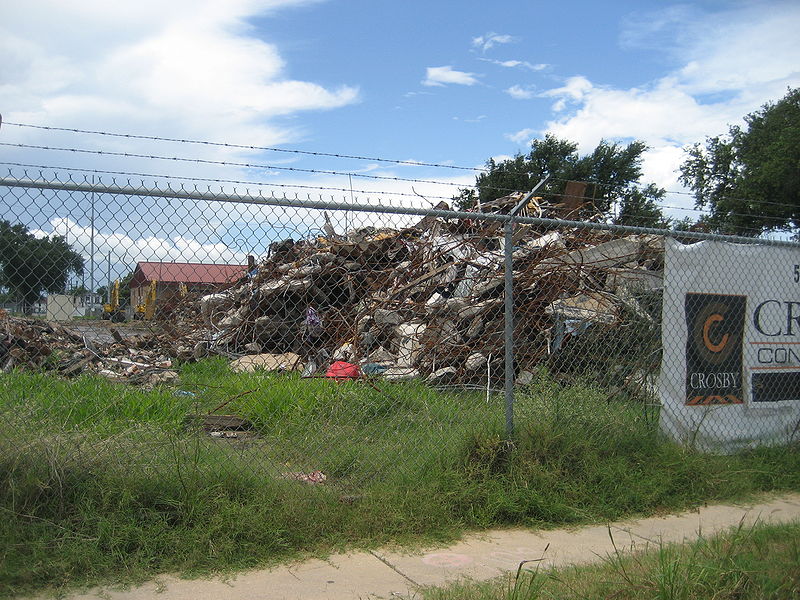 Though the storm has long since passed, women and children in New Orleans are still without shelter.

According to the Institute for Women’s Policy Research, while the city’s recovery hobbles forward after Hurricane Katrina’s punishing blows, a deep affordable housing crisis continues to hold back impoverished mothers:

Five years later, market rates for renting private apartments have risen, nearly all of the old public apartments have been removed while the new remain under construction, and former residents of public housing are still displaced. For public housing tenants, most of whom were low-income African American women and their families, housing support in New Orleans has been transformed.

Many of the women displaced by the disaster were the linchpins of struggling families:

The most recent data available from the U.S. Department of Housing and Urban Development (HUD) show that a majority of households (77 percent) in public housing of the area are headed by women, which includes homes with women living alone or with others … 88 percent of voucher subsidized housing units are headed by women.

Housing authorities have blasted through the city’s four major public housing projects to make way for “mixed-income” units. The plan, reflecting a longstanding nationwide trend of disinvestment in public housing, is purportedly to deconcentrate poverty in order to revitalize neighborhoods. Former residents, however, have witnessed more destruction than revitalization.

Take B. W. Cooper, a complex which once contained 1,550 units, and where displaced residents rallied in 2007 to defend their homes from demolition. They’re still in limbo after the elimination of most of the original apartments as part of a market-oriented redevelopment plan. Despite promises of helping residents resettle, it’s still unknown whether the new developments will resettle households (which were almost all Black and largely headed by women) in better circumstances, or just further atomize their communities.

In October 2008, 1,200 units were demolished with plans to build 740 units of mixed-income housing, including both affordable rental homes and market-rate rentals. The new development will be constructed in phases, with 410 projected units to be completed in the first phase. Of the original public housing stock, a total of 303 occupied units remain … Most of the “Big Four” public housing developments have not been re-occupied by residents. How many apartments will be available to former residents of the Big Four in the future is unclear at this time. Currently, most of the buildings remain under construction with completion delayed.

The local news site the Lens reported recently that the redevelopment of another housing project, Iberville, has raised concerns among community members that they’ve been left out of the planning process

The project will be done in line with federal urban housing policy of replacing dense low-income developments of the post-war period with small-scale neighborhoods, which provide fewer units for the very poor mixed with housing for working and middle-class occupants … Greater New Orleans Fair Housing Executive Director James Perry said that he did not know of  any public outreach done about the redevelopment.

“I’ve heard nothing outside of (closed) meetings,” he said. “Before HUD and HANO start talking about redeveloping Iberville, they should honor commitments to completing the rebuilding of the Big Four redevelopments they’ve already started.”

The Greater New Orleans Fair Housing Action Center also testified before Congress in July about rampant housing discrimination against families of color across the Gulf region.

Now that the post-Katrina landscape has become a fresh slate for pro-market housing reforms, New Orleans may soon forget that before the storm, places like B. W. Cooper weren’t just urban blights but real homes, where mothers struggled mightily to hold their communities intact—until Washington washed them away.

Reprinted from Colorlines with permission.

Photo of the partially demolished B. W. Cooper housing project from Wikimedia Commons.