What Are You Thinking, Oprah? - Ms. Magazine
Skip to content 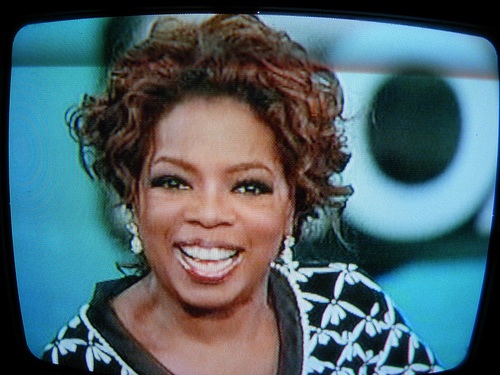 Jonathan Franzen’s Freedom is your book club selection, the first book of your last season?

The man who told National Public Radio in 2001:

“I had some hope of actually reaching a male audience and I’ve heard more than one reader in signing lines now at bookstores say, ‘If I hadn’t heard you, I would have been put off by the fact that it is an Oprah pick. I figure those books are for women. I would never touch it.’ Those are male readers speaking. I see this as my book, my creation.”

The man who told USA Today he feels bad to have been in the position to “give offense to someone who’s a hero–not a hero of mine per se, but a hero in general.”

For the love of God, Oprah, rescind the invitation.

You did it once. Do it again. Show some integrity. Live your best life. Tell the man who feared the Oprah Book Club sticker on his book would turn off male readers to get over himself, reflect on his egghead tantrum. You are not about promoting arrogance and male posturing.

So what if he sent you a galley and wrote you an apology. Jonathan Franzen does not need you. Just look around–it’s a Franzen fetish out there. Jumping onto this latest bandwagon of fanny-slapping brotherhood can come to no good.

Listen to Jodi Picoult and Jennifer Weiner and thinking-women all over the world. We have had it with the ubiquitous Franzens, “white male literary darlings,” with their faces on Time and their reviews in The New York Times.

Don’t make me go all Guerilla Girls on you, Oprah. If the literary world has a feminist masked avenger, it is you. You have changed the face of reading in this country. Fifty-eight percent of the books you have chosen since 1996 have been written by women. Brava. Don’t stop now–Franzen doesn’t need and hasn’t earned your support.

You start girls’ schools in Africa and send female audiences to Australia. Use your final season to honor the readers who have remained loyal to you: women. Do what singer Jewel croons: no longer lend your strength to that which you wish to be free from (not one for syntax, that Jewel, but nevertheless).

Make no mistake, Oprah, this is very much about gender and class. Oh yes it is.

I am a huge fan, Oprah. Always have been. I even get O Magazine. More than once, I have defended you against my highbrow academic colleagues who claim your book choices are not literary enough, mere beach-y schlock. I point to Toni Morrison, Pearl S. Buck, Edwidge Danticat. I print out the list, highlight it, post it on their office doors.

Quite simply, and I believe I speak for more than a few, I am a woman, like poet Adrienne Rich, whose “wild patience” has taken me this far. But no further.

Put down the pom poms, Oprah. Step away from the master’s piece. Fix this travesty. I am a literary scholar, so I know that Franzen’s book may be quite fine, the finest ever. Really. But that’s not the point, Oprah. James Frey may have fictionalized, but Jonathan Franzen has factionalized. He does not value women readers.

Before it is too late, for the love of all women, rescind this invitation.

A simple text will do: Sorry, Bubba. Too little, too late. Insult my women readers, insult me. O

Photo of Oprah by Flickr user nayrb7, under license from Creative Commons 2.0.