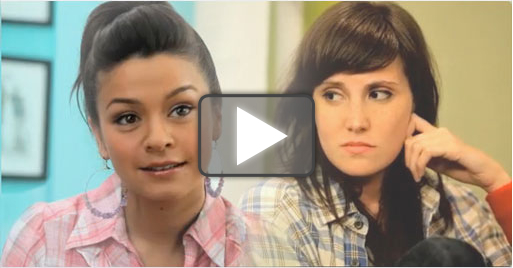 Interviewer: So what is it that you’re passionate about when it comes to code?

Kate: I really love code, you know? And I feel like it could change the world.

Interviewer: I’d love to have you come work with us here. I think you’re gonna fit in just fine, girlfriend!

Ali: Aw, did you just call me girlfriend?

That’s an excerpt from the pilot of Dot Diva, a fantastically geek-chic and enjoyably silly webisode that’s part of a new educational toolkit about girls and computer science. For Computer Science Education Week, December 5-11, the Dot Diva project is launching a new version of their website, dedicated to encouraging college-bound high school girls to consider computer science as a field of study.

Dot Diva is a collaborative project between the WGBH Educational Foundation, the Association for Computing Machinery, and National Center for Women & Information Technology, with funding from the  National Science Foundation. The webisode sprang from the idea that if girls watch other girls succeeding at being computer programmers, it might encourage them to follow suit–and that humor doesn’t hurt. The zany teaser proclaims:

KATE, a sarcastic fan of alt- and indie-rock. ALI, a lover of kittens, chick flicks, and the mall. Two girls with NOTHING in common… except for being ace programmers at a seriously-crazy video game company.

As they work to launch Rocklette’s first-ever game, these two Dot Divas have to outwit their smarmy boss, Kate’s doofus boyfriend, and the spy within their midst.

Julie Benyo, the Director of Educational Outreach for WGBH and the Principal Investigator for Dot Diva, explained why the project is so critical:

We’ve seen that women’s involvement in computing has dropped dramatically over last decade, and wondered: why is this happening? So we did national survey of college-bound students, and found that overall, boys think computing is great, but girls think it’s not for them or anybody near them…we didn’t know what it was [that was driving girls away], so we talked to people in the computing field and asked them, “what do you tell girls?” We found the enemy and it was us [people in computing] were telling a bad story to girls about computing.

“It was like trying to get someone to get interested in becoming a doctor by talking to them about organic chemistry instead of telling them they could help heal people,” Benyo said. If you’ve ever known anyone who’s taken O-chem, you already know this is a sure-to-fail strategy.

Her research found that when girls look for a career, their top three priorities are: something they can be passionate about; something that’s interesting; and something that can change the world. When girls are told that computer science can fulfill these three goals, their interest is piqued.

The Dot Diva approach is a tried-and-true strategy. Ten years ago, the interactive website “Engineer Your Life” (EYL) was launched to get high school girls to consider engineering. (It also provides information to educators on how to talk about engineering so as not to “scare away” the girls.) And it got results: According to Benyo, 88 percent of the girls who visited the EYL website became more interested in engineering, and more than 75 percent decided to take an engineering class.

Currently, the Dot Diva team is looking for constructive criticism and funding for their next episode of Dot Diva–the NSF grant only covered the pilot. For more information, email them at [email protected] I, for one, can’t wait to see what kind of crazy shenanigans happen next.