A Feminist Look at a Bug's Life - Ms. Magazine
Skip to content 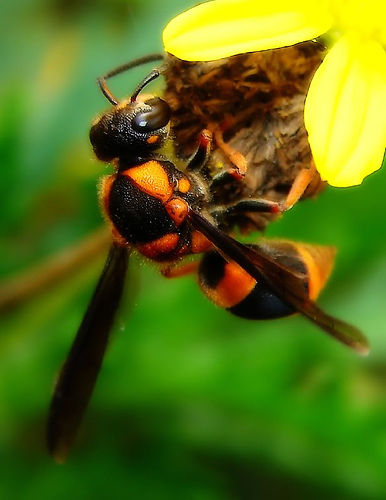 The bees are all women,
Maids and the long royal lady.
They have got rid of the men,
The blunt, clumsy stumblers, the boors.

—an excerpt from “Wintering,” by Sylvia Plath

As it gets colder, I wonder about the girls I left behind at my house down south. I’m talking about the spiders, the ants, the bees and wasps and even the mosquitoes who liked to torment me. When you think of it, it’s remarkable how much the world of insects and arachnids are dominated by females. As Anaïs Nin’s self-sacrificing Maman told her about women: “They have the more difficult role, the more serious task.” Well, the six and eight legged ones certainly have.

Consider the hymenoptera–wasps and bees and ants. The wasps I live with are docile, save the yellow jackets, but even a yellow jacket will quit chasing you when you’re safely away from her territory. As for the others, you’re nothing to them. You’re just another piece of furniture—unless you swat at them or threaten their nest. Last summer, the mother paper wasp built her nest, made of wood pulp she’d chewed up and arranged in perfect combs, in the space between the door and the screen door, which was vexing, since both doors were forever opening and closing. But she and her daughters never connected the disturbance with me or the other humans who came in and out.

The honeybees who pollinated the blackberry bushes at the back of the house are just as oblivious to humans when they’re working. Their industry is legendary, of course. A worker bee will soon work herself to death. When she does sting you in defense of queen and hive it tears her guts out. The males who mate with the queen have their guts and penis ripped out in the act and are no more, and in the fall the ones who survived are kicked out of the hive. Wasps don’t work themselves to death, and they can sting you many times. Their stingers are, I learned, modified ovipositors. As for their males—who cares what happens to them after they do their thing? They’re flying delivery systems for DNA. Since they don’t have ovipositors, they can’t sting.

Less welcome were the mosquitoes and the fire ants. The mosquitoes who forced their way into the house because they picked up the carbon dioxide on my breath and figured out I was a decent blood meal were also female. The males hang out around flowers, like Ferdinand the Bull, and pollinate them. But the female mosquitoes were desperate—they need blood to lay their eggs in whatever little patch of stagnant water they can find. Their biological imperative was crazy; they’re clumsy slow flyers and easy to kill if you’re patient and wait for them to get close enough. They are pitiful, but I kill them anyway.

Like bees and wasps, ants also raise their (mostly) sisters. Some colonies have more than one queen, and some have no queen at all, and “regular” female ants are sterile. As with the queen bee, the males mate with the ant queen and soon die, and she spends the rest of her long life pumping out eggs. The larvae need to be fed and sheltered and so the ants go forth from the colony in these little exploratory teams. Sometimes they wind up in the house, which I wouldn’t have minded so much except fire ants, of all the bugs that don’t need one’s blood, will go out of their way to find, bite and sting you even as you stand there, in your kitchen, minding your own business. The world belongs to them; what are you doing in it? So I lay down the ant traps even as I know they’re just following blind instinct and chem trails.

The cellar spiders are my friends ‘cause they eat all the other bugs, though they tend not to bother with the mosquitoes, who are scrawny even after a meal and rest in the middle of the wall where the spiders don’t hang out. I have all manner of spiders. I’ve seen a big argiope lying in an X shape in her orb web above the deck, undaunted even in a wild Southern rainstorm. There are beautiful smaller spiders of pearlized green and silver, a spider that lived over the guest sink that was the color of the gold crayola crayon, black widows, tiny jumping spiders with huge curious eyes, spiders the size of gumballs who weave perfect webs that cover entire windows, wolf spiders and nursery web spiders, who I take outside because they hunt and I just know they’ll end up in bed with me.

I counted about six cellar spiders who built webs around the edge of my bedroom ceiling last summer. These spiders were probably both male and female, and I suspect the smaller, more timid ones were the males. They kept well out of the way of the females till the urge to merge was irresistible, but then again they all avoided each other. They fight if they get too close, and if push comes to shove they’re not above a bit of cannibalism. Their venom is weak, and I’ve seen them have to bite prey a few times (in what looks surprisingly like an ardent kiss) before that prey stops struggling, and often they get away anyway. The venom of the black widow spiders who lived outside my window and around the garden spigot is far more potent. Still, these girls, who of course get their name because they’re patent leather black and have been known to eat their mates after doing the dirty, are no more aggressive than the cellar spiders. But then again, they might be less so.

Before I finally found a shower curtain rod for the master bathroom and had to use the guest shower, the cellar spiders would hang out around the faucet and the knobs in the bathtub. One day while I was doing something I heard a “thunk!” and looked to find that a very large wolf spider had fallen into the tub from somewhere. The cellar spiders began to attack her, which one would think was foolish, as she was so much bigger than they were. Then I realized that she was carrying her babies—dozens of them—and some of them had been shaken loose from her legs and body and were crawling around the bottom of the tub and the cellar spiders were going after them like an all-night buffet. The mother wolf spider was too exhausted and overburdened to defend them. Besides, she had dozens more still clinging to her and figured she could spare a few. I managed to take the plunger, coax her onto it and carry her and her remaining kids outside. Now that’s a real Mommy war.

So, what’s the feminist message? Sisterhood is powerful everywhere—except when it’s not and someone wants to make a meal of your children? Or you? Maybe the folks who use ants and bees in all those animated movies and TV commercials should realize that all those fearless soldiers and pollinators are girls? Or maybe the hymenoptera can be seen as examples of patience, perseverance, duty, sacrifice? Consider the words of Proverbs Chapter 6, verse 6:

Go to the ant, thou sluggard; consider her ways, and be wise.