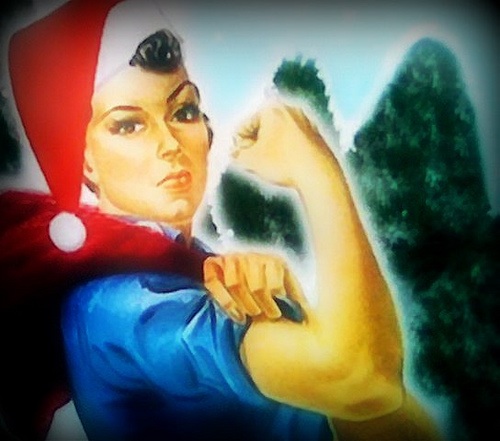 Sorry for the lag in posting fabulous feminist events, but as you know this is a grossly hectic time of year as we transition into 2011 via holiday family visits, frustrating family political chats, late-night bar visits with good friends and looking forward to the new year and what it will bring–I bring you a round up of some great events you can attend during your holiday breaks.

Today President Obama signed the “Don’t Ask, Don’t Tell” repeal, after Saturday’s Senate vote. While the repeal won’t be fully completed until 60 days after the signing, it is still certainly cause for celebration!

This Saturday, December 25th is Christmas, whether or not you celebrate the holiday, this is a time of year for giving, and I’m not talking about overpriced sweaters or tiny boxes of perfumed soaps. Giving your time volunteering  or giving money to a charitable organization is a great way to give back. One way that is important for feminists to give back this year is to get involved in the #mooreandme campaign. A Twitter campaign started by Sady Doyle to hold Michael Moore accountable for his dismissal of Wikileaks founder Julian Assange’s sexual assault charges, Doyle has asked Moore to apologize and donate $20,000 to an organization that helps sexual assault and rape survivors. Doyle has rallied feminists to take the step Moore still hasn’t and donate to these organizations. Give back and donate to RAINN, Callen-Lorde, Survivor Project, or another organization that helps sexual assault and rape survivors to show Moore and other rape apologists in the words of Sady Doyle, “We’re not backing down. We’re not disappearing.” Check out Rachel Maddow’s interview with Moore last night, who finally somewhat responds to #mooreandme.

Calling all student activists! Instead of loafing around, watching Bravo reality TV marathons all day while waiting for school to start again, educate your campus about safe sex. Students can sign up until Monday, January 3rd for the Great American Condom Campaign, which is a grassroots movement aimed to reduce pregnancy and the spread of HIV and STIs on college campus by providing access to condoms. You will then have a Safe Site, which is an individual location for students to get condoms, information on sexual health and host sexual health programs/events. Make sure to sign up for this important campus resource!

Finally, need a couple films to see during the holidays? Here are a couple to whet your feminist film palate.

Today, December 22, The Coen Brothers’ new film, a remake of True Grit, starring Hailee Steinfeld and Jeff Bridges, is about a young girl, Mattie, who hires an U.S. marshal to help her track down her father’s killer comes out. Early reviews are saying that Steinfeld is the star of the film, despite an ad campaign that narrows her role, which Ms. Blogger Ned Resnikoff wrote on. In his review, Roger Ebert, says that Steinfeld’s character Mattie is “…the kind of person you’d want guarding your back.” Talk about a bad ass!

On Friday, December 24, Somewhere comes out in limited release. Written and directed by Sofia Coppola, of Lost in Translation and The Virgin Suicides fame, Somewhere is a moody examination of celebrity and Hollywood, focusing on a hard partying actor and his relationship with his 11 year old daughter. Coppola’s gorgeous images and interesting women characters will make Somewhere a must-see.

Blue Valentine comes out in limited release, on Wednesday, December 29. Despite its initial trouble getting an “R” rating, a ratings appeal and stars Ryan Gosling and Michelle Williams’ statements about the sexist ratings system helped to move things along. The film focuses on the complex nature of an unraveling relationship between Cindy and Dean, which spans over the years of their first dating to their present day marriage. Sometimes a too realistic peek at a dying relationship, one of the questions the film asks, as Ryan Gosling mentioned to New York Magazine: “There is this idea that if a woman has a husband who loves her and isn’t cheating, she should be happy. But what if you’re not happy?”

Happy Holidays and New Year’s Ms. readers! If you have any events in the new year that you would like featured, email me at kcadenas@msmagainze.com.