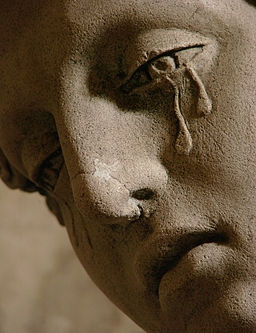 Now what on earth could that be about? Turns out it’s this study by Israeli neurobiologists :

In a study published Thursday in the journal Science, the Weizmann Institute of Science researchers collected emotional tears from female volunteers by showing them sad movies. Then they had male test subjects sniff the actual tears and fake tears comprised of saline.

A whiff of the real deal caused testosterone levels in the men to drop significantly. They found pictures of women less sexually attractive. When the men were sent into brain scanners, and shown a sad film, the men who were exposed to the fake tears didn’t show much lower activity in a region associated with sexual desire, but the activity in the same region was greatly reduced in men who breathed real tears.

The brain scans, the big yawn over alluring pictures and the drop in the he-man hormone led the scientists to conclude that “women’s emotional tears contain a chemosignal that reduces sexual arousal in men.”

Bottom line, ladies? If you’re looking for arousal, don’t turn on the waterworks.

This reporting may be among the most extreme on the sexism meter, though I’m not sure that sentences like this one are much better:

While this study should make guys feel better about being turned off when their lady cries, the women out there should remember that you—and your tears—are actually the ones in charge here.

In charge! Or how about tears being a weapon in a woman’s arsenal?

They say tears are woman’s best arsenal–and they probably are–for they are powerful enough to dampen a man’s sexual arousal, according to a new study.

How did we move from a study analyzing the impact of tears on arousal levels to the idea that women manufacture tears as a weapon in the battle of the sexes? That women cry on demand, for nefarious reasons of their own?

Not all biases in popularizations are quite that obvious. For a subtler flavor, notice the headline of the New York Times summary of the study:

In Women’s Tears, a Chemical That Says, ‘Not Tonight, Dear’

A team of Israeli researchers believes that tears, in addition to everything else they convey, send a sexual message that can be summarized as: “Now’s not a good time.”

What’s the bias? The assumption that all men are looking for sex all the time and that only the presence of tears will discourage them.

Let’s take a step backwards and look at the actual study and its possible meanings:

For practical reasons, Sobel and his colleagues have studied only women’s tears. But they suspect that men’s tears, and possibly children’s, also contain chemical signals and are eager to find out what messages they may convey.

That snippet suggests a completely different interpretation of the study findings. They may not ultimately be about the effects of women’s tears on men’s hormone and arousal levels but about the effects of human tears on other human’s hormones and emotions. This is not hidden in all the popularizations but it certainly has been pushed behind that “sex sells” curtain, and you have to work down the articles to find it.

Not that Dr. Sobel himself goes too far in that direction. Here’s his evolutionary conjecture on the findings:

Why women’s tears would send a message of “not tonight, dear” is puzzling. Some experts suggested the tears could have evolved to reduce men’s aggression toward women who are weakened by emotional stress. The studies did not measure the effect on aggression, although future research might, Dr. Sobel said. Another thought, he said, is that the effect of tears evolved in part to coincide with menstrual cycles.

“There’s several lines of evidence that women cry much more during menstruation, and from a biological standpoint that is not a very effective time to have sex, so reducing sexual arousal in your mate at that time is really convenient,” he said.

Dr. [Martha K.] McClintock, who reported 40 years ago that women who lived together tended to synchronize their menstruation, objected. “Oh, please,” she said. “Do we know that women cry more often during menstruation?”

She said it was “premature to speculate about the evolutionary function” of chemo-signaling in tears, adding: “I have no doubt that it affected sexuality as they report, but I would be very surprised if it doesn’t turn out to affect other emotions in other contexts. Maybe it’s affecting some deeper, more fundamental psychological process that drives the effect that they’re reporting.”

“Oh, please,” indeed! That was my reaction to many of these popularizations and to Dr. Sobel’s further conjectures.

Here are my further conjectures: It seems like a very useful and common-sense conclusion that another person’s tears will reduce your sexual arousal. Something tear-worthy is happening and perhaps it’s an important survival cue to pay attention to. Don’t you think this is at least as strong a hypothesis as Sobel’s menstruation one?

These popularizations are not a bad example of how studies having to do with women and sexuality are routinely offered to the wider audience. It pays to read carefully. It also pays to remember that sometimes small new studies with exciting findings (such as this one) turn out to be the last studies with such findings. But we seldom hear about such negative results from the popularizers.