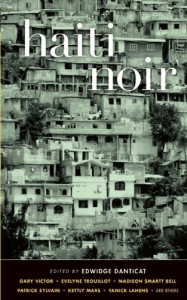 There was always risk of dying from hunger, an infectious disease, a natural disaster, a crime. But there was also hope, laughter, and boundless creativity.

The immense energy, humor and creativity of those writers living in Haiti and in the Haitian diaspora is precisely what Danticat succeeds in capturing through this collection of 18 original stories by established writers such as Patrick Sylvain, Ibi Aanu Zoboi and Kettly Mars, and new authors like Marvin Victor. What emerges is a fascinating, deeply complex portrait of Haiti as a vibrant country and of Haitians as a individuals who are still capable of exercising agency within a context of political corruption, oppression and ever-proliferating NGOs.

Few of the stories conform to the crime-thriller parameters most often associated with noir, but rather push the limits of the genre to include a lustrous mix of literary styles, from hallucinatory fiction to devastating realism. “Each writer defined noir for him–or herself and came up with something powerful,” Danticat said in a recent interview. And this seems fitting for an anthology that is interested in revealing the scope of the Haitian landscape. Each story is connected to a particular town or neighborhood, like the coastal Ville Rose or the splendid Pacot, a locale “full of … clustered gingerbreads and terraced villas that looked as though they had been sculpted out of the neighboring hills.”

What all of the stories have in common is an exquisite complexity, a darkness that invites the reader to re-read stories like Mars’s “Paradise Inn,” a surreal thriller about a police official who becomes stranded in the remote town of Gokal. Or Josaphat-Robert Large’s “Rosanna,” a harrowing tale about the kidnapping of a beautiful young woman from a wealthy Pacot residence.

In “Rosanna,” we hear a blur of shouts and cries from emaciated beggars in Port-au-Prince’s sprawling slums, stretching out their grime-covered limbs and pleading, “I am dying of hunger!” We also experience the painful disconnect between the male captor, who uses physical force to command respect, and the “young bourgeois girl” who was for 21 years sheltered from the “smouldering garbage heap[s]” that lay just beyond the hibiscus outside her breakfast window. The reader knows who committed the crime, but is left to weigh the muted violence of poverty and immense social stratification that has been built into the fabric of Haiti’s long, complex history.

Danticat knows that art provides a means of recovering a spectrum of voices that have been lost in traditional (white-authored) representations of Haiti. It wasn’t long ago that Haitian migration was conceptualized as a significant “problem” for the United States; racist fears of cannibalism, Haitian Vodou (largely misunderstood as “voodoo” or devil worship, as Henry Louis Gates observes), and disease seeped into public discourse and sensationalized hostility towards Haitian migrants.

What the reader takes away from Haiti Noir is not only a profound respect for the masterful work of Haitian women writers like Evelyne Trouillot and Nadine Pinede, but also a longing to know more. The characters that emerge in the anthology are divergent figures, alienated by exile, thriving in the diaspora and devastated by limited choices. Their stories are multi-layered, thrilling and necessary.