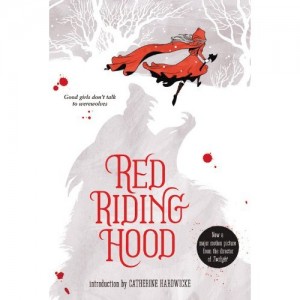 Her story has long intrigued feminist scholars for what its complex history reveals about changing attitudes towards women. In a previous Ms. Blog post, I described how Charles Perrault transformed an empowering narrative, in which a girl outsmarts a rapacious werewolf, into a cautionary tale advising girls to guard their virtue. Red fails to do as told in Perrault’s revision and is devoured! From a feminist perspective, things went from bad to worse when The Brothers Grimm added a woodcutter to the tale–the heroic male who saves the day.

This March, a new film adaptation of Red Riding Hood from Twilight director Catherine Hardwicke will hit theaters. Promoted as a Gothic, werewolf thriller, starring Amanda Seyfried as the sexy red-cloaked heroine, it looks enticing. But will it be feminist? Given that Little Red Riding Hood’s tale seems to have become a Rorschach Test for our cultural sensibilities, once I saw the promos I had to know.

By coincidence, I recently met Sarah Blakley-Cartwright, a recent graduate of Barnard College (and recipient of the 2009-2010 Lenore Marshall Barnard Prize for prose), who has penned her just-published first book: a YA (young adult) novel entitled Red Riding Hood, based on the film’s script and including an introduction by director Hardwicke.

Before reading the book, I contemplated the variety of texts converging here: A folktale engendered a written fairytale which inspired the concept for Hardwicke’s movie which inspired a novel based on that movie’s script. Thickening the intertextual stew, an enhanced E-book, replete with audio-visual clips, and a website providing an additional conclusion after the film’s release, will also be available. Whatever the digital platform, my feminist heart yearned to find a female-friendly storyline with an empowering message for young readers. Admittedly, I also wanted a fun, feral read.

So far, I have found what I hoped for (the online ending won’t be posted until after the film debuts). Written in lyrical prose, Blakley-Cartwright’s page-turner of a novel takes place in a village plagued by a mysterious werewolf who could be any one of the villagers. Meanwhile, Cartwright tells the coming-of-age story of Valerie, a strong and relatable 17-year-old heroine who, in true YA fashion, struggles to navigate the thorny path to self knowledge.

I spoke with Blakley-Cartwright about the book via email.

Ms. Blog: Your main character, Valerie, has some strong feminist traits. In what ways do you feel you created an empowered or feminist heroine?

Sarah Blakley-Cartwright: Valerie is definitely an empowered heroine, in that she doesn’t conform to the standards her culture sets for her gender. The script established a world where girls aren’t supposed to leave the village to hunt or veer from the path to go into the woods alone. But Valerie does.

I know you can’t give away the mystery ending yet, but do you think it will be satisfying from a feminist perspective?

Yes, I think most devotees of the fairy tale will be surprised.

Do you feel that having a woman, Catherine Hardwicke, at the helm of this film helped move the storyline in a feminist direction?

There are so many women working on this film, too long of a list to include here. Throughout the process, Catherine really emphasized the strength of the female characters in the story. She, in fact, had the writer toughen up the grandmother, making her creative and independent rather than a trope.

How did you feel about classic fairy tales growing up? Any favorites?

I loved Italo Calvino’s anthology of Italian fairy tales, particularly a story called, “The Green Bird.” I chose it from the table of contents because I liked the color green, but to this day I still dream of the “little girl with the star on her brow.”

Your story has decidedly political overtones. Lately, futuristic dystopias are saturating the YA market, in part because they reflect our anxiety about what our culture might become. Your novel, set in a time long ago and far away, appears to have some post 9/11 parallels–a climate of fear threatens to erode the town’s humanity. Can you comment on some of your political themes?

The villagers become obsessed with trying to defeat the beast, but in so doing realize that they themselves have become worse than what they’re hunting.

That’s part of the reason why I decided on the third-person narrator. It enabled me to give voice to the town of Daggorhorn and to create a sense of insularity among the villagers.

What was it like drawing your book from a film?

What could be better for a young writer than to have all that creativity before her? It was an amazing process to be able to see and interact with the world you’re creating on paper. I first arrived on set during pre-production when the crew was building the village, so just as I was putting each building down on paper the walls were coming up.

And you got to meet the movie’s star-studded cast, including, Amanda Seyfried, Julie Christie and Gary Oldman. Any on-set experiences that stand out?

Gary Oldman, who plays a very dark part, would see me on set with my Moleskine and joke that I hadn’t written enough pages. So I’d go home and sit down to try to write, but I would be haunted by the ghost of Gary–Dracula himself–lording over my writing desk. Poor Gary–he is really a very gracious, wonderful man.

Your novel is on the cutting edge of what is possible in the Digital Age, with an E-book version and a bonus website. How do you feel the Information Age has changed the writing process or changed readers–especially teens?

While I know it has changed the way most people write, I must say I am bit of a Romantic: I write everything by hand and type it up later. I make my edits by hand, too, using a system of indecipherable symbols that only I can make sense of. As for reading, I think the Internet provides a community for young readers to participate in, learning how to articulate their responses to the novels they read.