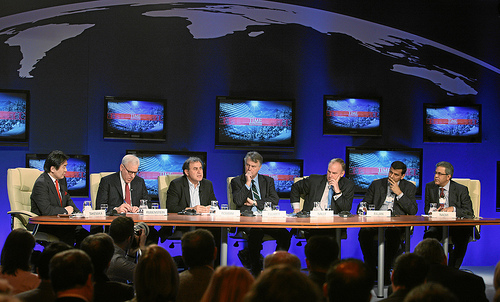 With the World Economic Forum (WEF) ongoing in Davos, Switzerland this week, writer Anya Schiffrin is launching an offense on all cylinders. In a piece in the Guardian and a series of blog posts on Reuters, Schiffrin, a self-proclaimed “Davos Wife,” (her husband is famed economist and Davos regular Joseph Stiglitz) is making gender a top agenda item this week.

Schiffrin raises critical points about WEF’s laziness and perhaps abject failure to adequately include women, or the broader issue of gender, at the annual meeting. This goes for Davos and a number of regional economic summits that happen year-round. WEF is male-dominated, she points out, as are the worlds of politics and business–but it doesn’t have to be that way. I’m with her so far: Without undercutting important figures like Indra Nooyi and Melinda Gates, who shine at Davos, the overall dearth of women’s involvement is both absurd and pathetic.

But Schiffrin should have stopped there. Instead, she begins to corrupt her own gender agenda, veering into lengthy musings on the “Davos Wife” and “Davos Mistress.” If the WEF can’t get gender parity right, she says, they can at least do better to support the women who are present (wives, girlfriends, and mistresses). Namely, this means cooler name tags, more fun activities and access to high-profile sessions. Nothing is said of Davos husbands, if they even exist.

I’m sorry … did I miss something here? Why are the spouses of WEF members attending Davos to begin with? Maybe if they weren’t there there’d be more room for small-time business leaders, young entrepreneurs or global leaders from other fields–all of whom might enlighten and enrich the discussion dramatically. Perhaps it’s not an either/or situation, but if the WEF is looking to cut costs I recommend considering this swap.

I get that Schiffrin is aiming at satire, but unfortunately she overshoots and lands somewhere in Buffoonville, USA.  Women’s roles at Davos become the butt of a joke rather than a priority of the agenda.

I really do appreciate her work in raising a sticky issue and even poking fun, injecting much-needed levity into a stuffy event. And yet … the genius of satire is moderation. This is the difference between the Onion and toilet humor: One must allow the social critique to shine through in sharp focus.

And the social critique of the satire here should be how outrageous it is that the WEF has continually failed its gender agenda. Women are still under-represented and marginalized at this global event.

Gender parity, equity and the empowerment of women is no longer a pet issue or a fad; it is the reality of how the world must move forward toward prosperity and stability. While closing the gender gap has been part of the WEF agenda for some time, by all accounts the outcomes have been inadequate. This is the message that should ring loud and clear: The WEF is behind the times if it doesn’t realize that the emergence of global giants such as India, Brazil and South Africa precisely hinge on women’s rights, political participation and economic independence.

Jokes aside, to Schiffrin and other Davos spouses who may rightly feel vestigial, my proposal may sound a bit harsh: Don’t come to Davos until you are invited of your own regard.  Granted, this should happen far more often. And when you are invited, leave your Davos husband at home to take care of the kids.