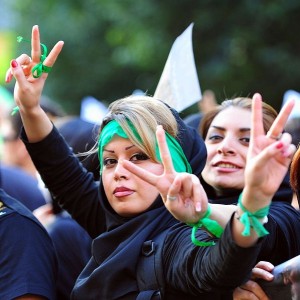 Anyone remember one of the most striking images to surface from Iran’s uprising last summer after the country’s so-called elections? Yes, Iranian women protesting, playing a huge role in shaping this revolt against their government.

Why should people be surprised? Iranian women, who make up 65 percent of university students in the country, are also among the most educated in the Middle East. They have been organizing underground for years under a regime that specifically suppresses their rights. In fact, at the end of last summer’s bloody protests, it was the face of one woman, Neda Agha-Soltan, shot to death by an Iranian government sniper, who became the defining symbol of the “Green Revolution.”

We are witnessing a similar movement now in Tunisia and Egypt: Young people are coming out in full force to fight for democracy, and women are at the forefront of these protests, breaking a huge stereotype that Muslim women are passive, voiceless or apathetic. As veteran Egyptian feminist and human rights activist Nawal El Saadawi described to Democracy Now:

While it is electrifying to see Muslim women take to the streets during such intense times of political upheaval, the streets are not where you normally find them. Although Tunisia has been emerging as a real leader for Arab and Muslim women’s rights, and the country has some of the most progressive laws for women, the picture varies from country to country. Egypt’s women enjoy considerable social freedoms over their Iranian counterparts, and last year Egyptian Parliament even passed a law mandating that 64 new seats in the lower house of parliament must go to women. However, traditionally both Iran and Egypt limit the roles of women in public life–reflecting, despite huge progresses, a struggle for equality that we see across the board in Muslim countries.

Democracy and women’s rights go hand in hand. And no group understands that equation better than Muslim women. That is why they are always among the first to take the opportunity to get out on the streets to fight not only for their country’s future but for women to have an equal role in it.