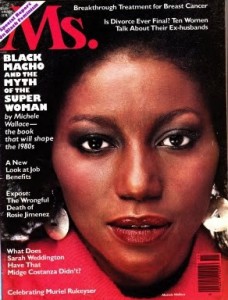 In January 1979, you might have walked past a newsstand in New York City and noticed the piercing brown eyes and free-flowing hair of Michele Wallace staring you down from the cover of Ms. “Black Macho and the Myth of the Superwoman … the book that will shape the 1980s” read the cover, in stark white text.

In the magazine’s excerpt from the then-about-to-be published book, Wallace explained the myth of the Black Superwoman: A woman who has “inordinate strength” and is “stronger emotionally than most men.” The Black nationalist movement, she said, viewed women as “one of the main reasons the black man had never been properly able to take hold of his situation in this country” and how “the black man has not really kept his part of the bargain they made in the sixties” during the fight for equality. The book, Black Macho and the Myth of the Superwoman, went on to include a separate essay on  “Black Macho,” a term that encapsulated the anti-intellectual impulse within Black Power rhetoric.

Back in 1979, you probably would have been stunned by this text, and you wouldn’t have been the only one. Wallace’s book led to debate about the role of Black Macho, the relationships between African American men and women and the place African American women held in the fight against racism and sexism. In honor of Black History Month, this groundbreaking book and the aftermath of its publication are well-worth revisiting.

In a 2009 post on Wallace’s blog, she explained the circumstances behind the publishing of the excerpt and book. On one side stood her anti-feminist, but otherwise supportive, editor at The Dial Press, Joyce Johnson, who “all but breastfed [Wallace] through every stage of the writing and the completion of the book for publication.” Wallace explains:

She and the others opposed the use of the word feminist in connection with the book, on the publicity materials, on the book jacket, and in every aspect of the packaging or promotion of the book. Feminism they said would kill the book because feminism was finished and done with.

On the opposing side, Ms. wanted to market her work not just as a feminist text but, as Gloria Steinem would loudly claim in the cover line she wrote, “the book that will shape the 1980s.”

The magazine cover image itself was a source of conflict for Wallace. She was still in disbelief that Ms. would feature her on the cover, especially since her book was not particularly timely, so during the photo shoot she did exactly what the professionals told her, despite opposing instincts. She recalls:

At the shoot, instruction one. Take those braids out of your hair. They will ruin the cover. This the hairdresser did. But I didn’t know what to do with my hair under such circumstances so you see instead that unruly hair style I had where my hair is being I am not sure what. If it looks like my face is covered with makeup, it is, as the makeup artist applied layer after layer of a various assortment of foundations trying, I can see now, to somehow brighten my hopelessly olive blackness. People say this is a beautiful picture but I can’t see it. I hated it.

Despite the stylists’ apparent lack of understanding of how to photograph women of color, Wallace is right about what people say: The picture is beautiful. While there is no data available about how well the issue did, one can imagine that the cover alone inspired women to pick up a copy that they might not have otherwise noticed. The book itself would top best-seller lists–and both the book and Ms. excerpt evoked much debate.

Criticism of the book came from all fronts, as Calvin Hernton writes in “The Sexual Mountain and Black Women Writers” in the Black American Literature Forum:

The mobilization against Wallace … was quick and solid. It came from all sectors of the black population. …The men were the ones who were angry. …The men claimed that the women had fallen prey to white feminist propaganda. They said that black women, like white women, had been duped into turning against their men. The most truculent assertion was that the writings of black women were “divisive” to the cohesion of the black community. The men said that black women writers were aiding the white male-dominated, racist, capitalist society in the historical oppression of black people.

Wallace’s critics–in Time, The New York Times, The Black Scholar and other public forums–accused her of vast generalizations and of devaluing the success of the Civil Rights movement. June Jordan, in The New York Times, took offense to the Ms. cover claim that the book would shape the 1980s. Wallace took some criticisms to heart, revising some of her points in an introduction to a 1990 edition. But in 1997 Wallace wrote protectively of the book:

While I don’t think of Black Macho as the Holy Grail, I am not dismissive of the book. Indeed, I believe it to be one of those immortal texts destined to be misread and misunderstood in its own time, but to survive whatever onslaughts are hurled at it. Somewhere in the future it will find its home. Or perhaps it will just help make the future. Just because I gave it birth, doesn’t mean I understand it.

Wallace was right–the book has survived the criticism and remains a landmark black feminist text. Her discussion of the Superwoman has developed into an ongoing critique of the “Strong Black Woman” archetype. During this month devoted to Black history, this text deserves rereading.