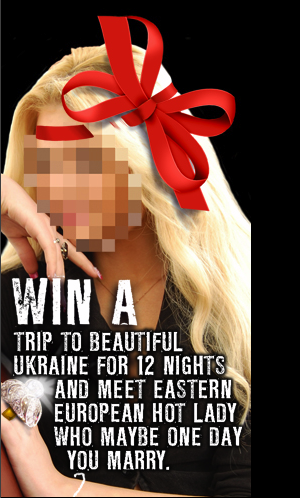 Yesterday we reported on New Zealand’s The Rock FM’s “Win a Wife” contest. The contest gave a N.Z. man the chance to pick a Ukrainian bride from the Endless Love Agency database. Also included was an all-expense-paid trip to Ukraine to, presumably, pick her up and bring her home. On Feb. 15, after an international uproar, The Rock had pulled the contest from its website and posted the following disclaimer in its place:

Due to the growing concern and controversy surrounding The Rock’s latest competition ‘Win a Wife’,  Rock management will be making a special on-air announcement at 5 p.m. this afternoon.

One might have thought they were going to apologize and announce the cancellation of the contest. They didn’t.

Last night The Rock announced that they felt the title of the contest was “misleading”  and have instead renamed it the “Win A Trip To Beautiful Ukraine For 12 Nights And Meet Eastern European Hot Lady Who Maybe One Day You Marry” competition. Aside from the name change, all other aspects of the competition–including the premise that women are prizes to be won–remain the same.

The decision to change the competition name came after complaints from Ukrainian officials. In a letter to the Broadcasting Standards Authority, Ukrainian Ambassador to Australia Valentyn Adomaytis wrote:

The Embassy of Ukraine, the existing Ukrainian New Zealand community and general public opinion in your country… take it as the indecent demonstration of low taste and cultural standards as well as utter disrespect and violation of human dignity directed not only at Ukrainian women but at the entire better part of the humankind.

The Facebook group “Stop The Rock’s ‘Win a Wife’ Campaign” has been putting pressure on The Rock’s advertisers to withdraw, but as of now the winner of the newly-renamed, still-misogynist contest is scheduled to be selected by The Rock on Feb. 28