If You're Facing an Eating Disorder, Don't Face it Alone - Ms. Magazine
Skip to content 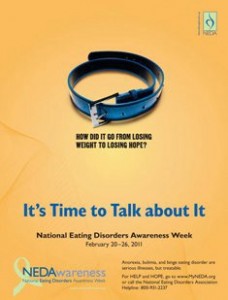 This week is National Eating Disorders Awareness Week. Take the opportunity to learn the truth about eating disorders, or to play an important role in fighting them.

Here is one major truth about these pervasive illnesses: Eating disorders lie. They deceive us into believing that whatever and however much we eat is wrong. They insist that whatever we weigh is shameful, and that whatever size or shape we may be is never good enough. When it comes to recovery, however, the most pernicious lie in ED’s arsenal has nothing directly to do with eating. Rather, it’s the notion that we “need” to be left alone.

A second critical truth: It’s not the person but the disorder that depends on isolation. Starving, bingeing and purging are secretive and solitary behaviors that feed on shame. And shame itself is alienating. Shame tells us that no one else could possibly understand, care for or help us. Shame insists that we don’t deserve friends or loved ones, especially not those who attempt to nourish us. Shame makes sure that we feel alone in the world, and stranded. As a result, isolation becomes the hollow core around which an eating disorder spirals. Setting the stage for recovery means confronting the eating disorder’s lie of isolation.

In truth, no one on Earth is alone. There are billions of us here! And we’re all, to greater and lesser degrees, related by our mutual flaws and yearnings, our weaknesses and frustrations—and by our essential human appetites. Those appetites—for nourishment, love, pleasure and meaning—deserve to be shared and celebrated, not hidden behind closed doors. When you’re trapped in the lie of “necessary” isolation, however, it may seem as if everyone else is celebrating and you’re not invited to the party. To free yourself, you need to reach out to a few trusted individuals who are willing and able to reintroduce you to your own appetite for life.

You may feel as if you’re alone on your recovery stage—alone but for the domineering voice of the eating disorder, of course. But actually, crowding in the wings, is a large cast of friends, family, teachers, pets, classmates and colleagues, doctors and therapists. Some have known you your whole life; others may have just met you. Some are worried for you, but don’t know what to do. Others have the tools to help but need your permission to approach. Many are as baffled and frustrated by your illness as you are, and will gladly support you in your battle—if only you’ll let them.

You have the power and the right to choose who will join you in the fight for your health and who won’t. Staying out there alone with an eating disorder, however, is not a viable option. The end goal of the eating disorder is to empty that stage of everyone—including you. In other words, its target finale is death.

Recovery means opting for life. And life demands relationships. To reclaim your health, you need to exercise your power to connect with others. If that sounds daunting, it’s probably because the eating disorder has convinced you of yet another lie—that you’re powerless to make your own choices, especially when it comes to love and trust. Instead of allowing you to relate normally to other people, the eating disorder insists that you fixate on your body. The longer you’ve been ill, the more difficult it may be to accurately see or hear the people around you. But try to pay closer attention to the individuals who share your daily life. Consider how you’re connected and how each one of them makes you feel. How has your illness affected them? How much do they want to help you? What could they contribute to your recovery? What would you need to do to help them help you?

Think of yourself as a casting director. Before a play is cast, actors must audition. The casting director pays close attention to each person’s voice, expression and body language. He considers which of these individuals will be best for the production—who will bring the most genuine energy, useful skills and honest commitment to the common effort?

The people you choose to help you set your stage for recovery should meet the same criteria. They’ll support you without judging you or tearing you down. They’ll make a genuine effort to understand what’s wrong, and do their utmost to help you figure out how best to make it right. They’ll admit they don’t have all the answers, and they’ll doubtless have a few flaws of their own. (Not even the healthiest, sanest, most loving people on Earth are perfect!) But they are wholeheartedly there for you, for your health, for your well-being. You need them, and they need you.

It’s worth noting that sometimes the friend who can offer the greatest sense of reassurance and acceptance may not be a human being. In Gaining I wrote about the powerful role that horses are playing in some treatment programs, and several readers wrote to me about the importance of animals in their recovery. “She has changed my life,” one 48-year-old woman wrote about her Morgan mare. “She’s taught me about commitment and selflessness. And for the first time since I was 12, my eating disorder came in second place. Last night when I went to see her, I thought about how horses reflect our own emotions. As I was thinking that thought, she backed up, turned around and stared right into my eyes for the longest time.”

In most cases, however, the crew that’s most eager to set the stage for your recovery will be your family. That’s because ED is making them suffer right along with you. As one woman wrote, while her son was held hostage by his eating disorder for four years, through multiple hospitalizations, the whole family had been traumatized. Now, she said, each and every one of them was struggling to define a path for recovery that would bring both her son and the family through intact.

Even before therapy begins, families can come together by learning the facts about eating disorders. Many parents and partners, out of shame or guilt, mistakenly blame themselves or believe the illness is under their loved one’s control. Others, out of frustration or fear, may refuse to believe that their loved one is seriously ill. It can be reassuring for everyone to learn that genetics play a primary role in the development of these conditions, and that no one actively chooses either to have or to cause an eating disorder.

The metaphor of a gun best describes how eating disorders actually develop. Genes create the gun in the form of certain highly sensitive temperaments that are accompanied by a biological tendency to deal with anxiety through eating behavior. Environmental conditions and attitudes, such as cultural and family values that emphasize looks and status over substance, load the gun. And emotional distress, which may range from intense trauma or abuse to adolescent anxiety over identity and independence, pulls the trigger.

What all this means is that eating disorders actually serve a function: They fire a warning shot to signal that something emotionally profound is amiss. However, this function is only useful if the person affected and those around her learn to read and respond appropriately to the signal. If the gun is not disarmed, the signaling can turn lethal.

Reading the signals is difficult in a society that holds up emaciated actors and models as standards of beauty. It’s also difficult in families that consider it healthy to be unnaturally thin or compulsively fit and busy. Parents, siblings, partners and friends who have never questioned their own pursuit of idealized looks can easily fail to connect the dots when a person they love becomes dangerously obsessed with her or his weight. Sadly, the push to achieve and look good to the outside world can override honest communication.

But the emphasis on appearance is not the only obstacle. When I began interviewing other people with histories of eating disorders, I realized that almost all of us had relatives with eating disorders. Yet often the illness was denied–self-starvation was even defended as “discipline” within the family. In some families, everyone was so respectful of each other’s need for “space” that intimacy and trust collapsed. In others, honesty was met with violence or rejection. Then, when everyday pressures were compounded, whether by something as mundane as a verbal insult or as serious as a death in the family, the person who never raised her voice, much less misbehaved, turned her imperfect pain against herself.

Recovery represents a critical opportunity for everyone in the family to cut through the isolation, shed the shame and disarm the gun. The person who’s “sick” is never truly alone. Whether the rest of the family consists of parents or siblings, a concerned spouse and children, close friends or a beloved animal, everyone has a stake in recovery, and every member who’s able and willing has an important role to play.

This blog is adapted from the author’s forthcoming book Restoring Our Bodies, Reclaiming Our Lives, to be published next month by Shambhala Press.