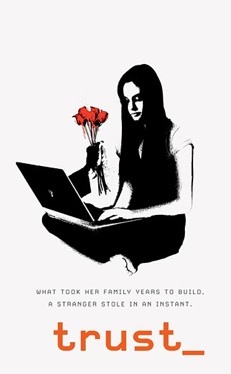 April is Sexual Assault Awareness Month, but the MPAA is censoring a movie aimed at a teen audience because it includes a rape scene. Trust, which is directed by David Schwimmer and opened in U.S. theaters on April 1, centers on an online relationship between 14-year old Annie (Liana Liberato) and her cyber boyfriend, “Charlie,” whom Annie believes to be a junior in high school–until they meet in person and she realizes he is much older than he claimed.

The film features a scene of sexual assault, as Charlie pressures Annie into sexual activity and then commits statutory rape. Regarding the scene, director Schwimmer, who has worked with the Santa Monica-UCLA Rape Treatment Center for well over a decade, comments,

There is no nudity, no overt sexuality other than what needed to be implied for a scene in the hotel room where we learn that a rape took place.

When the MPAA initially slapped an “R” on the film, Schwimmer appealed, arguing that a PG-13 rating could help the film reach a teen audience with a warning about the danger of online predators. But when he refused to cut or alter the film, his appeal was rejected. It was released in the U.S. with an “R” for “disturbing material involving the rape of a teen, language, sexual content and some violence,” barring those under 17 from seeing it without an adult.

That’s a shame, because Trust gets pitch-perfect what it is like to be a teenage rape survivor: the scrutiny one undergoes in the microcosm of high-school politics, the heightened awareness that that classmates and teachers are gossiping about the intimate details of the assault. Annie laments that her “life is ruined” even as she struggles to come to terms with Charlie’s coercive manipulation (when her Dad says she was “attacked,” she says, “it wasn’t like that … you don’t even know him!”)

Trust invites viewers to examine their own ideas about what it means to give consent. Legally, Annie cannot consent to a sexual relationship with the adult Charlie, who has misrepresented his age and identity from the beginning. Yet many around her, including her classmates and friends of her parents, claim that because she didn’t explicitly say “no,” she was not raped. With the help of her supportive parents (Catherine Keener and Clive Owen) and a therapist (Viola Davis), Annie comes to accept that her community’s understanding of consent is deeply flawed: Charlie violated her ability to grant a meaningful “yes” because he was an adult who pretended to be a teenager.

What does it say about the MPAA that a film which demonstrates compassion, sensitivity, and nuance regarding a teen’s sexual assault is deemed too mature for teenagers under 17 to watch alone? Ironically, last week’s universally panned rape-revenge-fantasy Suckerpunch, which contained a half dozen attempted or implied rape scenes, snuck by with a PG-13; the only cut the director had to make to pacify the MPAA was the sole consensual sex scene. Perhaps Suckerpunch got a pass for being fantastical. But given the prevalence of online predators and sexual assault, teenagers should be trusted with realistic sexual-assault content that relates to their age group. The MPAA’s rating of “Trust” limits a potentially important and mainstream conversation on sexual assault in the digital age.