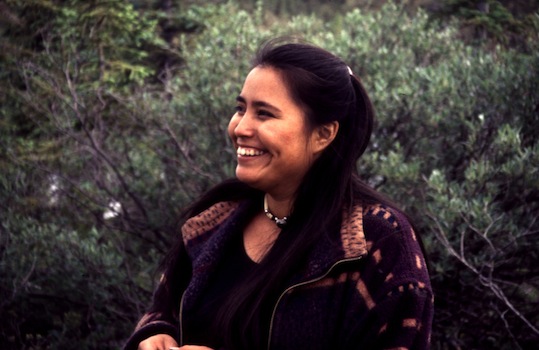 Indigenous women in the U.S. and Canada are taking on Big Oil — and winning.

“Most people don’t know what a subsistence way of life is,” says Faith Gemmill, an environmental activist from the Gwich’in territories in northern Alaska. “In other places, if you need anything you just go to the grocery store. Here, it’s not like that. We hunt for our food; we fish; we gather. It’s the cost of survival for us.”

On Alaska’s North Slope, where below-zero temperatures and underlying permafrost preclude agricultural development, indigenous communities necessarily rely on caribou and fishing for sustenance. But this subsistence way of life, which for many also bears a deep historical and cultural significance, is daily threatened by encroaching industries bent on extracting the region’s abundant fossil fuels—at any cost.

As a site of major oil exploration since the 1970s, Alaska now produces about 13 percent of the nation’s domestically sourced oil, with production steadily expanding across the Arctic. The cumulative effects of this development have impacted local communities in myriad ways. While a 2002 study by the National Academy of Sciences found that industry development displaced subsistence animals, damaged the tundra and exacerbated climate-change effects,Gemmill argues that the long-term impacts on humans are even worse.

“One community that has been surrounded by oil and gas development reported higher rates of asthma, pneumonia and other upper respiratory illnesses,” she explains, adding that potential risks are even greater. “If there were ever an oil spill, there is no way they could clean it up. They admit they don’t have the technology to clean up oil on ice.”

As executive director of Resisting Environmental Destruction On Indigenous Lands (REDOIL), Gemmill is part of a growing network of indigenous women organizing against oil extraction on their lands, both in the U.S. and Canada. In recent years she has focused on halting Shell Oil’s plans to develop offshore drilling in the Chukchi Sea, which borders Alaska’s northwestern coast. Shell leased the area from the U.S. government in 2008 for $2.7 billion, but Gemmill has repeatedly frustrated their attempts to begin exploration. Last year, REDOIL won a lawsuit against Shell, effectively halting production until more studies are completed on the potential environmental impacts of offshore drilling.

The oil industry wields incredible power in communities where exploration is taking place, often dividing residents by offering them economic opportunities—thus complicating activism against the destructive side of the industry’s activities.

“The industry comes into these communities when people are in high school and starts paying men huge amounts of money just to go to trainings—to get them hooked,” says Kandi Mossett, an organizer with the Indigenous Environmental Network. “It causes tension in the community, because while they’re destroying our water supply, they’re also providing jobs.”

While men have jobs in the industry, women have taken on the task of leading the activist fight. “My guess is that 98 percent of the leadership in the activist communities we work with are women,” Mossett says. “It’s not to say that men aren’t worried, but typically they will be the ones working in the industry, on the oil rigs. …I think women recognize that there is an inherent need to do something, because our children are sick and our future is in trouble.”

In Canada, indigenous women leaders have been facing off with the oil industry in communities perhaps even more gravely threatened than Gemmill’s.

Canada is the single largest source of American oil consumption, with the lion’s share of that oil procured from bituminous tar sands on or near indigenous territories—an effort widely considered to be the largest industrial project in the world. Yet the extraction of tar-sands oil is easily the most destructive of all oil production methods: Not only does it routinely involve clearing ancient boreal forests and strip-mining the soil, it also leaves behind enormous toxic lakes—visible from space—that have been linked to abnormally high rates of cancer among residents of nearby communities.

“The First Nations folks right downstream from the huge oil project in Alberta are definitely sick, and get more and more sick all the time,” says Mossett, who has seen firsthand the public-health impacts of tar-sands oil production.

“There are pictures of all of these deformities in fish—cancers, pus,” she explains. “In the moose, they are finding so many cancers. In women, there are reproductive problems.”

The human impacts of tar-sands oil production is terribly understudied, but a 2009 report by the Alberta Cancer Board confirmed that cancer rates in the Fort Chipewyan community, downstream from the Alberta mining project, were 30 percent higher than average. Another study, conducted in 2007, revealed dangerously high levels of arsenic, aluminum, mercury and other toxins in Fort Chipewyan’s water, sediment and fish.

It’s no coincidence that the communities most endangered by oil production are indigenous, according to Caitlin Sislin, the North America director of Women’s Earth Alliance.

“People of color and low-income communities are systematically targeted for fossil-fuel development and waste dumping,” she explains. “Federal laws often ease the way for mining and toxic dumping on tribal lands, resulting in widespread contamination and public-health impacts.”

A bulk of the battle, then, is building up the political power of indigenous communities, ensuring that they have the resources necessary to combat big business and bad public policy.

“We are trying to build the capacity of community leaders who are on the frontlines of these issues so that they can address these issues themselves,” Gemmill says. Her organization trains community members who are confronted with massive industrial projects and provides them with legal assistance and political support. Women’s Earth Alliance similarly links indigenous women leaders with legal and policy advocates who can, pro-bono, help them fight extractive industry, waste dumping and fossil-fuel production on sacred sites.

“We’re not inventing or imposing any solutions,” says Sislin. “Instead, we are responding to the vision articulated by women leaders like Faith and do our best to bring advocacy resources to support the realization of those visions. Our work is about bridging that access gap.”

While these collaborative efforts have produced great victories—from the halting of Shell’s offshore-drilling project to the recent delay of an expansive pipeline that would carry tar-sands oil across six states—there is much work left to be done. And the duty of indigenous women to undertake that work, says Gemmill, runs even deeper than simple community obligation.

“As a woman and a mother I have a sacred responsibility to uphold and nurture life,” she says. “And as an indigenous woman, I strongly object to the notion that our children’s future can be compromised for short-term economic gain. …I will do everything in my power to protect and preserve that future.”

Catherine Traywick is a contributing editor at Hyphen magazine and will attend UC Berkeley’s Graduate School of Journalism in the fall.

Photo of activist Faith Gemmill by Pamela A. Miller.

Reprinted from the Spring 2011 issue of Ms. To have this issue delivered straight to your door, join the Ms. community.