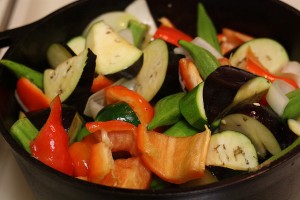 When Pamela Koch walks in the door with her family at 6:30 in the evening, she pulls a bowl of vegetables out of the fridge and dumps them into a pan waiting on the stove. She’s been home from work for less than a minute, yet dinner is underway. “If we’re really hungry, there’s something psychological about, ‘It’s already cooking,’” explains Koch. That’s why she pre-chops the vegetables at 6:30 in the morning.

Many people think that real, local food is a luxury reserved for families with a stay-at-home parent who has nothing else to do but obsess over supper menus, while working parents give their kids frozen dinners made mostly of petroleum byproducts and corn syrup. “There is the assumption that women who are working full-time are career-focused and therefore not family-focused,” says Koch, an adjunct associate professor and executive director of the Center for Food & the Environment at Teachers College, Columbia University. However, she says, “if you plan ahead a little bit and are committed to eating locally and having home cooked meals, it is very possible.”

Unfortunately, the food industry turns its profit by encouraging people to buy processed foods. Says Joan Gussow, who has authored many books about food and ecology, including the seminal text of the local-food movement, This Organic Life,

I think we’ve been sold a bill of goods about the need for complex meals that ties right in with what the manufacturers want to sell us. If you’re trying to make a complicated dish, then it’s easier to buy it even if it’s lousy.

On the other hand, if you’re trying to make a dish with six ingredients, cooking from scratch can be fast and easy. But the food industry doesn’t benefit as much when people cook simple meals, so it manufactures demand for complicated food choices. “The mere idea that the 30,000 or 40,000 things in the supermarket are there because of consumer demand is just a lie,” says Gussow.

But what about the argument that processed food freed women from the kitchen, allowing them to join the workforce? That’s a myth, says food-writer Laura Shapiro, author of Something from the Oven: Reinventing Dinner in 1950s America. The food industry produced military rations during World War II, then after the war turned to making similar processed foods and marketing them to civilians. Shapiro says that although women–and mothers in particular–were entering the workforce in large numbers post-WWII, this is not because they could suddenly get dinner out of a box or the freezer. “It took the food industry some 20 years to convince Americans that cooking real food was too much trouble,” she says.

Today, the suggestion that parents might cook from scratch smacks of regression to a repressive family model, with Mom tethered to the kitchen. But, as one family discovered, it’s not about mothers going back to cooking, it’s about parents–and, indeed, most of the population–learning about food again. People are used to thinking food comes out of a box or a can. Explains Shapiro,

People not being accustomed to cooking is a bigger barrier than money or class or any of those other things that people are bringing into the discussion [of real food.] If you have never cooked, it seems very difficult and very threatening,

The real-food movement unintentionally furthers these misconceptions by upping the ante. Shapiro acknowledges that many people feel overwhelmed by purism:

It used to be that we could all feel very nice that we were putting a pork chop on the table instead of takeout. But no, then it had to be some local pig that you knew personally. Then you had to butcher the thing yourself.

Not many of us are up to butchering our own pigs, and Gussow and Shapiro underscore that parents’ lives have become increasingly pressured since the days when women did all the cooking. So Shapiro advises setting realistic goals for family dinner: Sometimes people need to just order a pizza.

What we don’t have to buy is the assumption that working mothers don’t care if their kids eat chemicals. That’s a fiction designed to sell frozen dinners.

Emily Rosenbaum is a freelance writer who lives with her husband and three children in Boston. She has also written for Motherlode, Glamour and Brain, Child. Her website is emilyrosenbaum.com.