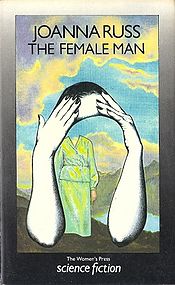 I’m not much of a connoisseur of science fiction, feminist or otherwise. But in the flush of the Second Wave, I read two feminist sci-fi stories that have always stuck with me: Ursula K. LeGuin‘s “Sur,” which appeared in The New Yorker in 1982, and Joanna Russ’s “When It Changed.”

The former imagines a secret expedition to Antarctica in 1909 by a group of women who simply want to see the place–not to be seen as heroes for being the first to reach the South Pole. Not to leave a flag marking their accomplishment–not even to leave footprints! As the woman narrator puts it,

I was glad … that we had left no sign there, for some man longing to be first might come some day, and find it, and know then what a fool he had been, and break his heart.

LeGuin went back to a fictional past for her tale; Russ ventured forward in time. I re-read “When It Changed” yesterday to remember both the story and Russ–who died last Friday at 74. She was best known for her influential 1975 book The Female Man, which signaled to many the beginning of feminist science fiction as a genre. But it was her award-winning short story, published three years earlier, that most intrigued me. Considering that I was a young feminist still repressing lesbian desire, it’s not hard to understand why.

“When It Changed” takes place on Whileaway, a non-industrialized future world with good soil, a “blessedly easy” climate and three-quarters of its 30-million populace living on farms. By the third sentence, the narrator has described a character named Katy as “my wife,” and mentioned the three children between them, “one of hers and two of mine.” But it takes us a few pages to be informed that the narrator, too, is a woman (it’s a same-sex marriage! Few of us imagined those way back in the 70s). And we only realize her gender when we we find out that all the men on Whileaway died in a plague six centuries earlier.

The “change” of the title refers to the sudden arrival on Whileaway of men from Earth, who meet with Katy and our narrator (whose name turns out to be Janet) and other local Whileaway women. One of the men insists that sexual equality has been “reestablished” on Earth, but Janet’s not buying it. When another man asks, “Where are all the people?” Janet knows that by people he means men–in the same way that a man might see a pair of women at a bar and ask, “Why are you gals here alone?”

“You’ve adapted amazingly,” the man adds. “To what?” Janet responds.

The man who boasts of Earth’s sexual equality tells her, “Surely you can see that this kind of society [on Whileaway] is unnatural.” Forty years after Russ wrote the story, that line still rings out like a speech from a present-day Republican on the floor of the U.S. House. A woman-run society is still considered unnatural–and don’t even get us started on a lesbian society in which men are superfluous.

“Whileaway is still missing something,” says the man.

Answers Katy: “I miss nothing, except that life isn’t endless.”

The women of Whileaway don’t need men to reproduce: They simply merge ova. I never forgot that detail of the story; perhaps it was the one that cinched the startling notion that we’re just one scientific breakthrough away from men being unnecessary for the continuance of humanity. (Then again, if men could merge sperm, they could advance the species without women–has anyone written a sci-fi tale about that?). Whileaway’s women are short–although Janet describes herself as “extremely tall” at 80 cm (31 inches)–but they’re certainly not puny in temperament. They’re often fierce, in fact, solving disputes with duels to the death. Janet herself has won three, and has a scar down her face to prove her mettle. And she already pictures the next generation of Whileaway women carrying on their hardy female traditions, imagining her eldest, Yuriko, dreaming a 12-year-old’s “dreams of love and war”:

running away to sea, hunting in the North, dreams of strangely beautiful people in strangely beautiful places … Some day soon, like all of them, she will disappear for weeks on end to come back grimy and proud, having knifed her first cougar or shot her first bear, dragging some abominably dangerous dead beastie behind her …

But “When It Changed” is a tragedy–a long dream of love and war that begins to end when the patriarchy returns to claim “its” women and use them to replenish Earth’s gene pool, which has been damaged by centuries of drugs and radiation (oh, Fukushima–how prescient you were, Joanna Russ!). You can feel Janet’s heart beginning to break. “Take my life,” she muses, “but don’t take away the meaning of my life.”

I know I should read more feminist sci-fi (I have been reading Julie Phillips wonderful biography of Alice Sheldon/James Tiptree, and eventually I’ll get to Tiptree’s stories), because the best of it–like Russ’s work–takes us into the heart of our world even as it explores alien ones. Russ looked at feminism and lesbianism through a fun-house mirror of sorts, but what was reflected back were truths that have stood the test of time.

Forty years later, “When It Changed” hasn’t changed at all.