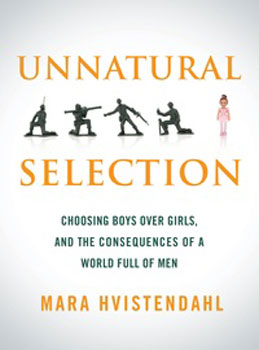 A woman’s right to safe, legal abortion has created a world of missing women, according to the most recent anti-choice talking points.

A new book by Mara Hvistendahl, Unnatural Selection: Choosing Boys Over Girls and the Consequences of a World Full of Men—reviewed here on the Ms. Blog–reports that in the natural scheme of things, 105 boys are born for every 100 girls. But those numbers are skewed in many countries: In India 112 boys are born per 100 girls, in China 121, in Azerbaijan 115, in Georgia 118 and in Armenia 120.

Hvistendahl does not blame the right to chose. But others do. Conservative New York Times columnist Ross Douthat and Jonathan Last of the Weekly Standard (writing a book review for the Wall Street Journal) look at this study and blame abortion rights. Feminists cannot be consistent advocating the right to choose while criticizing sex-selective abortion at the same time, they say. In their view, abortion must be restricted in order to save the world’s girls and women and regain the natural sex ratio.

But the right to choose is not the problem. The core culprit lies in valuing male children over female. When girls are esteemed as much as boys, parents will no longer seek to have sons and not daughters.

Douthat wrongly claims that patriarchy isn’t the core problem. He sees women’s empowerment as leading to more sex selection, not less, with many women using their increased autonomy to choose sons. Somehow he fails to see that patriarchy lies behind the phenomenon. Strange, since his next sentence admits that sex selection occurs “because male offspring bring higher social status.”

Unfortunately, patriarchy becomes embedded in women’s and men’s minds alike. If males are more valued in a society, women unconsciously pick that up at a young age. Or they may ask their parents, who are likely to reinforce the status quo. Is it any surprise, then, that so many women choose sons over daughters, hoping to increase their own worth?

Meanwhile, the proposed remedy of abortion restriction would only devalue women further.

Another recent New York Times article introduces us to Danielle Deaver of Nebraska, a state which restricts abortion after 20 weeks. She was devastated when her water broke at 22 weeks, leaving her fetus little chance of survival. She risked serious infection without induced labor, but that wasn’t allowed under the new law. She had to wait another 10 stressful days until she went into natural labor. The baby only survived 15 minutes, while Deaver developed an infection. Angered, she said, “This should have been a private decision, made between me, my husband and my doctor.”

Last year, there was another even more horrifying instance of how restrictive, moralistic abortion policies impact women’s lives. In this case, a Polish woman named Edyta died because doctors felt that treating her colon condition could lead to miscarriage or force an abortion. As writer Brittany Shoot explained,

Poland is one of several countries (along with Italy, Hungary and Croatia) in which doctors, not unlike pharmacists in the U.S., can refuse to treat someone on moral grounds.

Do these restrictions really value women? Or do we become disposable nothings whose bodies, hearts and minds don’t really matter?

Despite what Douthat and Last say, feminists are consistent in being pro-choice while criticizing sex-selective abortion. We must get at the root of the world’s missing women–the devaluation of women–and not try to remedy it with a “cure” that exacerbates the core problem.

For more feminist perspective on the issue of sex-selective abortion, see “Selecting the Same Sex,” from On The Issues magazine, and Unnatural Selection: Choosing Boys Over Girls and the Consequences of a World Full of Men.

War on Women Report: Republicans Propose 150 Anti-Trans Bills; Idaho Republican Says Women Are Like Cows; Trump Glosses Over His Role in the End of Roe
The ERA Has Been Ratified, Declares New Congressional Resolution
Men Should Think Twice When Entering a Race With Strong Women Candidates Already—Starting With Adam Schiff