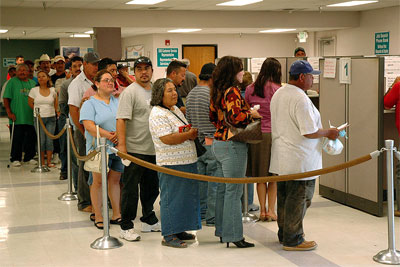 Finding a job is difficult enough with unemployment rates at 9.1 percent (as of May 2011), but it’s doubly hard for a group that already faces unique barriers: displaced homemakers–those who have worked unpaid in the home for years before rejoining the job market. Usually women, they can face a raft of barriers in seeking employment. Issues include employers’ perception that they lack “work experience” (despite the skills necessary for at-home caretaking work), out-of-date resumes, inexperience with current office technology, prejudice, and often, low self-esteem.

Take the case of Jasmine, who moved in 2006 from the Bed Stuy area of Brooklyn to Ithaca, a small college town in New York, because she wanted a better life for herself and her son. Her Department of Social Services (DSS) grant provided her with food stamps and covered her portion of the rent but left her with only $70 every two weeks to split between her two children. Plus, she says, her experience there was deeply dispiriting:

I felt like they were purposely trying to bash everyone in the program for getting assistance and not being able to help themselves out. I think that’s what made me completely depressed. Half of us were pregnant. What do you do when you’re pregnant and you don’t have a decent job? You have to go for assistance because you have a child coming.

Tired of bouncing back and forth between minimum-wage jobs and social services, Jasmine went to the Women’s Opportunity Center (WOC), a displaced homemaker center in Ithaca that provides training, employment counseling, and other support services to hundreds of women in the area. The center has feminist roots–it was formed in a local woman’s kitchen in 1979 to help women enter the workforce. Jasmine says:

They offered resume help, computer classes and they helped me get ready for work: clothing, makeup, shoes, pocketbooks–so I could feel comfortable going out in the workplace even though I was having income issues. Each time a job wouldn’t work out, they’d welcome me with open arms, they’d get me right back out in the field so that I wouldn’t have to go to social services for assistance. I could be self-sufficient.

They always reassured me: ‘Jasmine, you have so much experience, and you’re really bright. You can do better, don’t just settle for anything.’ They never gave up on me. At some point in life, you need people to not give up on you.

Jasmine beams when she talks about her current job working at a local bed and breakfast, which she found with the help of WOC staff members. Hers is a success story–but it’s not unique. For the last thirty years, displaced homemaker centers in New York like the WOC have served almost a quarter of a million low-income women and men, many who, like Jasmine, are struggling to re-enter the work force after taking time off to provide unpaid caretaking work.

But as of November 1 of this year, all of New York state’s 22 displaced homemaker centers may be non-existent, thanks to massive budget cuts in the state. According to Myrna Young, the Executive Director of five Everywoman Opportunity Centers in Buffalo, NY, and Chair of the statewide Association of Displaced Homemaker Center Directors, the decision to zero out funding will not only devastate thousands of women like Jasmine, but also harm the state’s economy in the long-run. Running on a modest $7.3 million in 2009-10, New York’s 22 displaced homemaker centers saved the state more than $4 million by enabling hundreds of women to leave public assistance, the New York Women’s Foundation recently reported. In helping approximately 1,300 program participants to re-enter the workforce, displaced homemaker programs helped to generate as much as $30 million in wages.

All in all, displaced homemaker programs return $14 to the state for every single dollar spent.

Melissa Klein, the director of Workforce Services in Schoharie County, says that displaced homemaker programs have historically had a hard time justifying their existence because many legislators don’t really understand what they do. In reality, displaced homemaker centers serve unique needs, as Klein explains:

These individuals face numerous challenges when trying to re-enter the workforce. Often their self-esteem is extremely low. They start to feel dumb and unskilled and it comes across in their demeanor. They know that they managed to buy $100 worth of groceries with $60 each week, or managed to get Joey to soccer practice, Betty to piano lessons, all while working around Billy’s nap time and getting dinner on the table on time. But ask them their skills and they have trouble translating that into budgeting, organization, multi-tasking, and scheduling.

Because of these factors, existing services can fail for displaced homemakers, as in Jasmine’s experience with DSS.

Young says that the displaced homemaker program needs just $5.3 million for all 22 centers to stay afloat. “We can survive and continue to provide services at that level. We’re certainly hoping that legislators will once again see the efficacy of the programs again. Our program is so small, it just got overlooked.”

Photo from Wikimedia under Public Domain.

Women’s Inequality Is Built Into the Laws and Constitution of Iran
Ranked-Choice Voting Is on the Rise—From the Academy Awards to the Texas Legislature
‘Dark Energy’: Poetry for Harriet Tubman