How Will Women Fare in the World's Newest Country? - Ms. Magazine
Skip to content 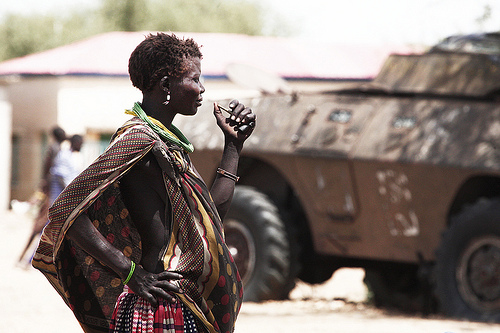 Saturday marked the birth of the world’s newest country: the Republic of South Sudan. The separation from the mostly Muslim North after decades of civil war was a result of a near-unanimous January voter referendum, and was met with jubilation yesterday in the new capitol of Juba.

Women, who make up 60 percent of the population of the new country, were among those weeping and dancing in the streets. They were also 52 percent of those who voted for the separation. According to NGO Women for Women International, many South Sudanese women see independence as “an opportunity for women to take a central role in rebuilding their country … a chance to say no to war and yes to peace, to hope for a future free of hunger, violence, and loss.”

To be sure, South Sudanese women face stark challenges. Sudan has a 92 percent female illiteracy rate, the highest maternal mortality rate in the world (1 in 7 births) and high rates of domestic violence, child marriage and female genital cutting.

Moreover, the conflict that has ravaged South Sudan for decades has especially devastated women, in no small part because of the widespread use of rape as a weapon of war. U.N. Special Representative of the Secretary-General on Sexual Violence in Conflict Margot Wallström explains:

In South Sudan as elsewhere, [conflict-related sexual violence] brings stigmatization and rejection, diseases and reproductive health issues, psychological trauma and unwanted pregnancies, and damages the entire social fabric. It has held communities hostage by preventing women from participating in public and economic life and undertaking many chores common to rural life, from gathering water and wood to working in the fields to sustain their families. It has kept girls away from school and reinforced gender discrimination.

However, a Sudanese women’s rights movement closely tied with the peace movement has gained momentum in the past decade. During the talks leading up to a 2005 peace agreement between North and South Sudan, women organized to protest their exclusion from the peace process. Since then, says Nora Benjamin, a women’s rights activist and member of Southern Women Group for Peace, “Women [have been] progressing, making changes, and getting jobs.”

Women’s groups worked hard to ensure that their rights were incorporated into the new country’s interim constitution, drafted this spring and passed on Thursday. Their efforts were rewarded, and the draft has a section dedicated to the rights of women. It guarantees women “full and equal dignity,” the right to own property, equal pay for equal work, 25 percent representation in government, maternity and child care, the right to participation in public life and the assurance that they cannot be married against their will.

Making sure these laws translate to reality, especially in rural areas, is a priority for Benjamin, as well as pushing the new nation to ratify CEDAW, the international Convention on the Elimination of Discrimination against Women (which the U.S. still has not passed). “There is still violence [in rural areas],” she says. “[CEDAW] has so many things in it that protect women from violence.”

Benjamin stresses the need for women to not only know their rights, but to take advantage of them. Though the 25 percent quota has resulted in some women in powerful positions, she says, the women elected are not necessarily representative of the interests of poor and illiterate women, who make up a sizable portion of the population.

She believes that education efforts in rural areas will be key to turning this around:

Our women need more enlightenment. There are other women, let’s say from the grassroots, that don’t know their rights. They always think that a man is more superior. … In the South, we have customs and traditions that a woman has no right to inherit, and cannot have so many things.

However, Benjamin adds, such cultures are not static, and can be changed gradually through workshops and conferences about women’s rights.

Even as the birth of the country is celebrated, peace in South Sudan is not entirely assured. Renewed violence in two regions near the disputed border, Abyei and South Kordofan, has resulted in international concern that the new nation may be engaging in a war with North Sudan if border-related clashes continue. With most of the focus on citizenship and the repercussions of the economic separation of Sudan, women’s rights concerns are being sidelined on the national as well as global stage.

South Sudan’s women’s rights activists will need global support in the months to come in their quest to shape a new and better country for women. You can start by sending them a direct message of support through Women for Women International, here.

Photo of a woman in Southern Sudan, May 2011, from Flickr user babasteve under Creative Commons 2.0.