Betty Ford's Death Illustrates What Has Been Lost in Our Political Culture - Ms. Magazine
Skip to content 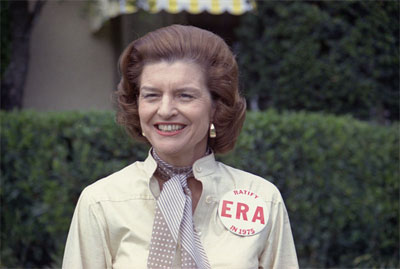 How much I appreciated your gracious letter telling of plans for the Western Regional Conference on Abortion and inviting me to attend.

Although my upcoming personal and official commitments will not permit me to be with you,  I am grateful for this opportunity to convey my warmest greetings to all attending and my hopes for the success of the Conference.

So wrote Betty Ford, in February 1976, to the organizers of one of the first medical conferences on abortion to take place in the U.S. after the Roe v Wade decision in 1973—a message that would have been inconceivable for any of the Republican First Ladies that followed her. What Betty Ford said publicly about abortion and what subsequent Republican women in that role could not, speaks both to the spirited and independent character of the former, who died on July 8 at age 93, and to the sea change in American politics that was to shortly come with the rise of the Religious Right and the role of abortion as that movement’s leading wedge issue.

But even in 1976, a newly emerged Right to Life movement was making clear that presidential candidates would be accountable for their positions on abortion, which had been legalized in 1973 with the Roe v Wade decision.   And President Gerald Ford, running for his first election to the office (after taking over from the disgraced Richard Nixon in 1974) was under attack from antiabortion forces for his “waffling” views on the subject, arguing that  Roe v Wade went too far, and  that the abortion issue should be left to individual states.  In contrast, his wife at that time publicly reaffirmed her full support of Roe, stating in a television interview that the decision took the issue “out of the backwoods and put [it] in the hospital where it belongs. “

To be sure, it was not only on the topic of abortion that Betty Ford was outspoken. Again, in a way that would be unimaginable for later Republican First Ladies, she identified as a feminist, supported the ERA, and spoke frankly about the realities of premarital sex.  Of course, not all her views were, in today’s terms, “liberal”—she was a strong supporter of the Vietnam War, for example. And the admiration she drew from the public—the New York Times in its obituary stated she was among the most popular of all First Ladies—transcended conventional politics.   It was her candor about her struggle with breast cancer, at a time when the disease was rarely spoken of publicly, and even more courageously, her public acknowledgment of her struggle with alcohol and prescription drug abuse (which led to the founding of the Betty Ford Center for treatment of chemical dependency) that arguably is the main source of such lasting affection from the American people.

And what of Betty Ford’s Republican successors as First Ladies? Did they speak as freely as she did? On the abortion issue, there is reason to believe that all of the women in question—Nancy Reagan, Barbara Bush and Laura Bush—were to varying degrees pro-choice (as indeed, privately, may have been all their husbands), but all these women felt constrained from speaking frankly. Nancy Reagan’s views are perhaps the most ambiguous, but Lou Cannon, Ronald Reagan’s biographer, has written that while the latter was governor of California, both his wife and father-in-law supported the California Therapeutic Abortion bill signed in 1967. In his memoir the late Donald Regan,  Reagan’s chief of staff during his presidency, quoted Nancy Reagan as saying privately to him “I don’t give a damn about the right to lifers.” The views of Barbara and Laura Bush are much clearer. The latter in a memoir published after her husband’s presidency stated her support of Roe v Wade. The former, in the summer of 1992, while her husband was campaigning for reelection, even stated her belief that abortion and homosexuality were “personal choices” that should be left out of politics—though whether this was a case of Barbara Bush acting in a moment of genuine independence  or in a calculated move to draw in support of the rapidly diminishing moderates in the Republican party remains debatable.

What is not debatable is that Betty Ford’s tenure as First Lady was the last time in American politics that someone in that role could inspire bi-partisan admiration—even while expressing her own political views. American politics has become so polarized, and the culture wars so fierce, that First Ladies can only be broadly liked if they suppress their own views on controversial matters. Betty Ford’s passing reminds us of what has been lost in our political culture.

Photo from Wikimedia under Public Domain