When a wave of protesters took to the streets in the Yemeni city of Taiz this week, a mass of black-clad women once again stood out in the crowd. To Westerners, their conservative dress might seem incongruous in a pro-democracy uprising, but these women represent the backbone of Yemen’s revolution: ordinary people galvanized by unbearable oppression.

Women protesters have been both especially prominent and especially vulnerable as the military violently cracks down on this latest uprising of civilian demonstrations. Similarly, back in April, the AP reported that the thousands of women who gathered in Taiz to protest the regime of President Ali Abdullah Saleh’s regime, chanting cries of peace, were soon attacked “by police with sticks and rocks, setting off a furious battle with male protesters that left several people hurt, activists said.”

In a dispatch from a tent city in Yemen’s capitol, Sana’a, Jennifer Steil of Die Welt reports that participation in street protests is empowering and transforming the women of Yemen:

“When you come to the square, you’re looking at the new face of Yemen,” says Raja al Thaibani, a photojournalist who has been documenting the revolution since April. She was surprised when she found out that many women on the square do not cover their face with the traditional niqab and that they give speeches about human rights and freedom of the press. And that men listen to them….

One of the particularities of the opposition movement in Yemen is that, for the first time, women are part of public life. “One woman, who could neither read nor write, told me she felt as if she being educated — just from having been exposed to life in the square,” says al Thaibani.

In fact, one of the first leaders of the movement was a woman: Tawakkol Karman, a human rights activist and co-founder of the organization “Women Journalists Without Chains.” She regularly leads demonstrations and rallies. While Karman lives on the square in a tent, her three children have moved in with their grandmother. She misses them, but she says “what I’m doing here is for my children, it’s for all future generations of Yemeni children. It’s the price to pay for our freedom.”

Taiz, a relatively modern enclave in an often fiercely traditional society, is the convergence point for many different revolutions, cultural, political and social—all seeking to overturn the regime but pursuing different visions for renewal. While Western observers may wish to paint Yemen’s revolution as a black-and-white battle between liberal and secular forces on the one hand, fundamentalist and conservative forces on the other, in fact the banner of revolution has brought together many political factions with divergent philosophies. Stacey Philbrick Yadav of Foreign Policy reports:

The issues that have cemented the alliance have been questions of transparency, anti-corruption, devolution, electoral reform, etc., and there is a generation of Islamists conversant in the idioms of and committed to building a democratic regime. The most divisive issues have been related to issues of gender equality and, to some extent, sectarian and regional concerns.

Younger activists, driven by the spirit of Tunis and Cairo, are churning the fractious opposition coalition by pushing secular ideals. A more radical vanguard affiliated with the Joint Meetings Party has even compelled the Islamist group Islah to somewhat reorient its gender views. Recent internal elections brought 13 women into Islah’s leadership ranks (though women still could not run as candidates in national elections).

While Yemen’s instability and internal conflict make it somewhat unique in the region, activists across the Middle East and North Africa are wrestling with similar questions of how political change will, or won’t, advance women’s rights. Leading women’s voices in Egypt’s ongoing uprisings have already warned that their revolution is in danger of being derailed, not only by oppressive military rule but also gender oppression within the movement.

Will gender justice be included in the agendas of social transformation that are now taking shape in the Arab Spring? It’s too soon to know, but least women in Yemen are not afraid to make that demand. 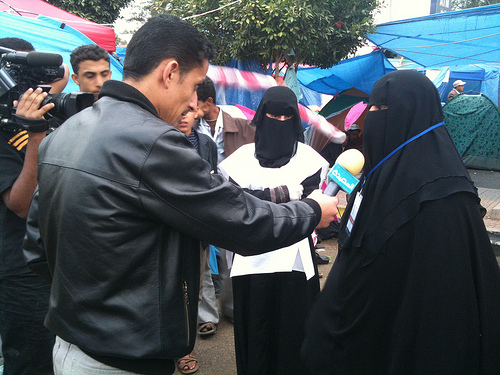 Photo of women protesters in Yemen from Flickr user Sallam under Creative Commons 2.0