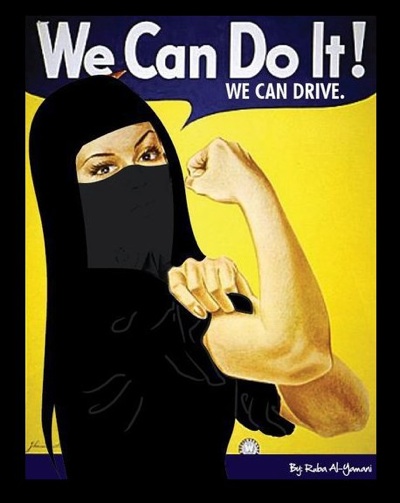 Yesterday, 14 U.S. Senators–all of them women–sent a joint letter to King Abdullah of Saudi Arabia asking him to end the ban on women driving in the kingdom.

Arguing that the ban “stands in stark contrast with the commitments your government has made to promote the rights of Saudi women,” the letter reads:

In June 2009, the government of Saudi Arabia accepted the majority of the recommendations put forward by the United Nations …including to “[a]bolish all legislation, measures and practices that discriminate against women…including: limitations on freedom of movement, the prohibition on women driving and restricted access by women to work, public places and commercial facilities.” Given this commitment, we strongly believe it is time to abolish the prohibition on women driving once and for all.

In Saudi Arabia, women took to the road to protest the driving ban on June 17th, and have since been continuing to drive. They’ve also launched the “Teach Me How to Drive” campaign, recruiting local women with foreign driver’s licenses to give driving lessons to other Saudi women. International supporters have been putting increasing pressure on public figures worldwide to express solidarity with the protesters and demand that Saudi leaders to end the ban.

The senators follow in the footsteps of Secretary of State Hillary Clinton, who made a public statement supporting Saudi women driving in June. Clinton’s comments voiced support for the brave women protesting the ban rather than addressing King Abdullah directly.

Clinton’s statement–ending her previous approach of “quiet diplomacy”–came only after Change.org garnered almost 23,000 signatures petitioning Clinton to speak out on behalf of the Saudi Women2Drive movement. U.S. officials had been wary of losing favor with Saudi leaders and compromising one of the U.S.’ few alliances in the Middle East.

The senators’ letter thus marks a bold step forward in what has been so far a tentative diplomatic response by the U.S. government. “We welcome the support of so many U.S. senators,” said representatives of Saudi Women for Driving in a statement. “It’s high time that American leaders start taking the lead, and demanding that Saudi women be afforded the most basic human rights.”

Go here to urge the Saudi embassy and the United Nations to support driver’s licenses for Saudi women. Look too for the Summer issue of Ms., where we report on the outcome of the protests and other activism by Saudi women in the face of gender oppression, including their fight for the right to vote. Join Ms. now to get the Summer issue delivered before it hits newsstands.