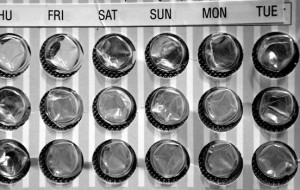 When Department of Health and Human Services (HHS) Secretary Kathleen Sebelius announced last week that birth control and other women’s preventive health care services would be covered by health insurance starting in August 2012, it set off a cacophony of right-wing hysterics. They zeroed in on the “radical” concept that contraception is prevention and displayed no concern for the health and welfare of American women.

The idea that birth control could be considered preventive seems to be news to many of these folks. It’s pretty clear to me that preventing unwanted pregnancies would qualify as a “preventive” health care service. But Congressman Steve King (R-Iowa, and no relation to me) got a little frightened by the idea and took to the House floor to warn that if we “apply that preventative medicine universally, what you end up with is, you’ve prevented a generation.” I guess King thinks that if all women knew how to avoid having children, no woman would have one. I find that kind of strange. But, after watching his performance, I have to admit, the idea of birthing another Steve King might be enough to give a lot of women pause.

Then Fox News pundits got into full-throated fulmination. Dana Perino huffed that she might be in favor of providing birth control for women if she “didn’t see a lot of people out there able to buy a new pair of shoes. We have to be able to make some choices here.” So, women, we have to make a choice–bare feet or unwanted children? I guess it’s a step forward that Perino doesn’t want us barefoot and pregnant.

But what’s lost in all this alarmist bluster is that the guidelines are about more than just birth control–they are a dramatic step forward for women’s health. And that’s great news.

In case you haven’t seen the list of preventive health care services covered, in addition to birth control, they are:

Preventive care makes sense. It costs less than treatment, saving money in the long run. It’s also a saner approach to health care that saves lives and improves our health and our quality of life. It’s long past time for women’s health to be a matter of national concern.

At a time when we’re being told that we have to deal with the national debt by “tightening our belts” and sacrificing so that the wealthiest among us don’t have to, isn’t it nice when the government comes up with a policy that helps women and saves money. In this summer of our discontent, disillusionment and disgust with our elected officials, it’s good to have some good news.