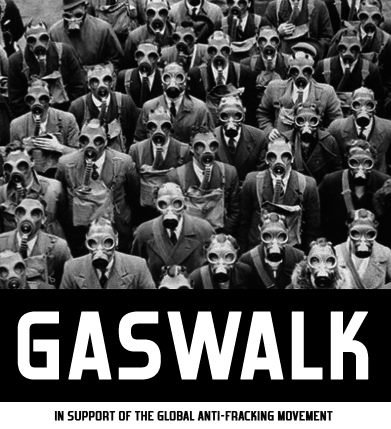 South Africans celebrate not one, but two Women’s Days every year. First there’s International Women’s Day in March and then there’s the country’s own National Women’s Day on the 9th of August. The latter commemorates the day in 1956 when 20,000 women from all over South Africa marched on the Union Buildings, the administrative seat of government in Pretoria, to protest against the Apartheid state’s repressive pass laws. All of August is officially designated as Women’s Month.

In Cape Town, a number of individuals and environmental organizations, led by local photographer Kian Erikson, decided to organize a protest march against “fracking” on National Women’s Day.

Fracking, or more formally hydraulic fracturing, is a water-hungry, environmentally dangerous and increasingly controversial method for extracting a type of natural gas, called shale gas, from underground layers of rock. Several international and local oil and gas companies have applied for rights to explore for shale gas in large areas of South Africa, including the semi-arid, ecologically sensitive Karoo region.

Earlier this year, the South African government declared a moratorium on fracking, but activists have maintained steady pressure on authorities to ban the technology permanently. The Gaswalk protest march on this year’s National Women’s Day was part of that agenda.

Besides being a general anti-fracking action, Gaswalk drew specific attention to the very important, yet often overlooked connections between environmental degradation and the lives of women. Since it seriously endangers the availability of sufficient clean water in an already critically water-stressed country, fracking presents an enormous threat to women and children. Not only because they are among the most vulnerable sections of society, but also because they are commonly responsible for providing families with potable water and fresh food grown with such water. This is especially the case for women living in the rural areas that will bear the brunt of fracking activities.

When the courageous women marched on the Union Buildings in 1956, they sang a protest song especially composed for the occasion. Warning the racist government of the day not to interfere with women’s rights, “Wathint’Abafazi Wathint’imbokodo!” loosely translates to “When you strike a woman, you strike a rock!”

In the case of the Gaswalk march, participants emphasized the fact that if fracking is allowed in South Africa, it will directly and detrimentally affect women’s lives and that the country’s women will have none of it. When fracking strikes a woman, it strikes a rock!

According to Muna Lakhani of the environmental NGO Earthlife Africa,

“Hydraulic fracturing […] directly threatens the quality of our air and water, and thereby the health and wellbeing of our people. Resource extraction has made corporations and an elite rich, but local communities remain poor and are most at risk from the environmental destruction caused by fossil fuel extraction.”

While Marina Louw of the Climate Justice Campaign asks “can we really afford to jeopardise the health of future generations in a part of the country that, due to climate change, is likely to become even more arid in coming decades?”

Erikson points out that,

“Worldwide, more and more people are calling for a global ban on fracking, as the threat to clean air and water supplies, and the devastating environmental and social cost, is becoming evident. We are calling on our government to ban fracking, in order to protect our vulnerable water resources and the quality of the air we breathe.”

On the day, anti-fracking protesters–women, men and children–arrived in their numbers to turn the event into a colorful procession through the historic center of Cape Town, stopping off briefly to picket in front of a Shell petrol station (Shell being one of the companies who want to use fracking in the country).

The marchers wore all manner of costumes and anti-fracking t-shirts, carried posters demanding an end to fracking and handed out flyers explaining exactly why fracking is such a bad idea. In keeping with the theme, many participants wore gas masks to highlight the foul and hazardous stench that fracking is casting over our environment and our health. After the success of Gaswalk, you can be sure that many more activities of this type are to follow until fracking has been banned for good.

Reprinted with permission from Care2

I'm a freelance writer and bookshop manager who lives in Cape Town, South Africa with my wife Sam and our two sons Josef (12) and Benjamin (10).