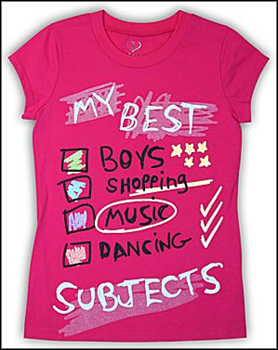 This week, feminists celebrated a victory when J.C. Penney halted the sale of a girls’ T-shirt that reads “Too pretty to do homework, so my brother has to do it for me.” The shirt, suggesting girls should be too consumed with their looks to care about being smart, was pulled from the company website after customers declared their outrage via a Change.org petition. J.C. Penney issued an apology and a spokesperson commented “We’re looking into it right now, to find out how it happened.” Hmm. Maybe it fell out of an airplane onto JCPenney.com?

Even with the full-throttle backpedaling, the victory isn’t total. Penney’s is still offering another shirt (left), which lists, on a screaming pink background, the only things girls ages 7-16 are good at–you know, shopping, boys, music and dancing.

This means war. T-shirt war, that is.

To briefly toot our own horn, Ms. and other feminists have been incredibly successful at stopping the sale of sexist and misogynistic T-shirts. Last year, Ms. readers and Care2 joined students at California State University, Long Beach to protest a misogynistic T-shirt suggesting women should be seen and not heard. As a result, in April, Tilly’s withdrew the shirt. In August, campaigns by numerous British feminist groups prompted the U.K. Advertising Standards Authority to ban ads for a “Nothing tastes as good as skinny feels” shirt available on Zazzle.com.

We’ve already seen how sexist messages in the media shape how young girls view themselves, and it’s not good. Marketing to young girls should not include messages that sexualize them or teach them to hide their smarts. That’s why Mattel’s 1992 “math class is tough” Barbie was fought with such vigor by feminists.

Unfortunately, the T-shirt wars rage on. We hope you’ll join us in campaigning against Penney’s “best subjects” tee.