Sex and the City: Imagine it Today! - Ms. Magazine
Skip to content 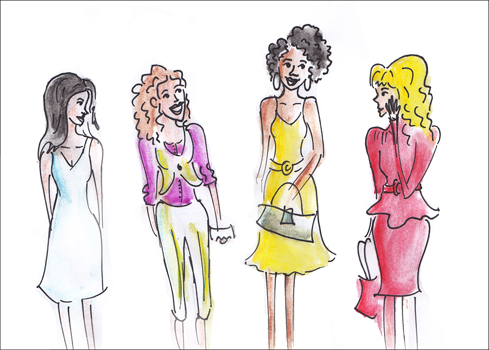 According to Entertainment Weekly, the CW television network is about to close the deal on a prequel series to Sex and the City, based on Candace Bushnell’s The Carrie Diaries. While it’s painful to watch Hollywood destroy memories of a once-clever show in order to squeeze every last drop out of a dying franchise (the Sex and the City 2 movie, anyone?) it’s even more frustrating that TV execs are looking backwards instead of forwards. We don’t need the SATC 1980s-retro-prequel; what we need is SATC revamped for a new generation of women negotiating work, family, love and sex in contemporary America.

What made SATC so progressive when it first aired in 1998 was that it brought the intimacy of some contemporary women’s lives to light. Not only did they talk about their sex lives, but the characters discussed such real-life feminist issues  as sexism in the workplace, body image, financial independence and dependence and, eventually, marriage and parenting.

Today, many point out the flaws in SATC–such as its unrealistic portrayal of how single, working women living in New York City could afford to own a closet of Manolos and dine on $30 salads. People also criticize the show for its one-note portrayal of gay men as lispy, effeminate “queens.” For all its barrier-breaking in the late 1990s and early 2000s, SATC doesn’t really hold up as a socially progressive show today. And we need one.

If a truly contemporary SATC were being written today, what would it look like?

–The character of Samantha (Kim Cattrall), who called herself a “try-sexual” (she’ll try anything once), represented women who were exploring casual or non-monogamous sex with multiple partners. But today, the taboo-smashing Samantha might be polyamorous, pansexual and gender queer. One episode might focus around Sam’s insistence that hir friends start using the non-gendered pronouns “ze” and “hir.” While the original Samantha dabbled in kinky sex, today’s Sam could be part of the organized kink community, giving viewers the opportunity to learn about SM, safewords and negotiation checklists.

–Miranda (Cynthia Nixon) represented “career women” trying to compete with men in a sexist workplace. Today, Miranda would still be fighting that battle–but as a black woman in the workforce. Changing Miranda’s race would open the door to discussions about the intersections of racism, sexism and class and how they play out at home and in the workplace. Much of the original Miranda plot arc centered on her financially unbalanced relationship with baby-daddy Steve; she was a high-earning lawyer, he a low-earning bartender. A black Miranda would add another layer of complexity, providing the opportunity to explore the oft-reported issue of black women out-earning black men.

–Charlotte (Kristin Davis) represented a more conservative sort of woman who had to negotiate her traditional values and goals (love, marriage, children) with her refusal to settle for less than everything she wanted. Today, Charlotte might be re-imagined as a femme lesbian looking to meet her butch “Ms. Right,” get married, and have children. Charlotte’s plot arc gives us the opportunity to discuss the legalization of gay marriage, the mixed feelings towards marriage in the gay community, the reality of the gay dating scene and coming out in the workplace. What could be really exciting here is the portrayal of Charlotte’s butch lovers as attractive and sexually desirable–something I don’t think we have ever seen on mainstream television.

–Carrie (Sarah Jessica Parker) was, in some ways, the least developed character on SATC. We know almost nothing about her family, her upbringing, etc. This ambiguity is strategic since, as the SATC protagonist, every woman is supposed to be able to identify with Carrie a little bit. Playing both a writer and the show’s narrator, Carrie’s purpose is to give women a voice. Remarkably, her character translates seamlessly into a contemporary role: Instead of being a newspaper columnist, thoroughly modern Carrie would be a sex and fashion blogger trying to stick to her ideals and manage her image as a burgeoning internet celebrity. The original Carrie sometimes had trouble separating her personal life and her public life; updated Carrie would continue this struggle, negotiating the additional challenges to privacy and persona on the web.

It’s unfortunate that instead of looking forward and tackling the new issues of the day, television producers are jumping on the Mad Men bandwagon and going retro, as in the upcoming Playboy Club and Pan Am series. It’s easier to discuss sexism and other social issues retrospectively; it’s more difficult to capture the complexity of women’s lives as they unfold in the moment.

SATC became iconic because it gave a generation of women a voice in a mainstream TV series. What show(s) will be the voice of the next generation of women? When will we see realistic contemporary issues and challenges faced by women represented on TV?