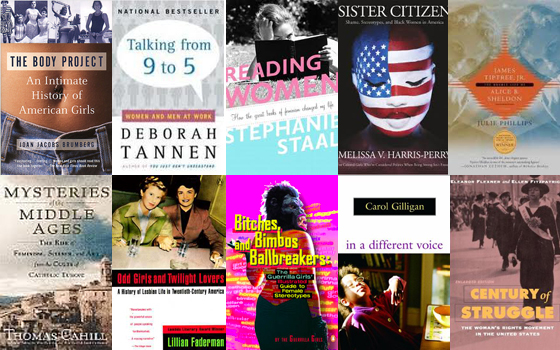 Thanks to all the Ms. readers who submitted their choices for the top 100 best feminist non-fiction books! We were thrilled with your enthusiasm, and we’re even more interested in what you think of the final outcome.

Today, we begin to roll out the finalists, beginning with 100 through 91. You’ll soon see that it’s an eclectic 100! If there was ever any doubt, we’ve learned again that feminism is not a straitjacket but a multitude of subjects, perspectives and passions.

These first ten offer refreshing reinterpretations of women’s experiences on levels small and large. They deal with how men and women communicate, how women perceive their bodies and mind, and how we have pushed past crushing bigotry and stereotypes. And, fittingly, you’ll also see one woman’s account of how classic feminist books changed her life.

99. Odd Girls and Twilight Lovers: A History of Lesbian Life in Twentieth-Century America
by Lillian Faderman
Penguin Books, 1991
Using a plethora of source materials from journals to news accounts to medical literature, Faderman tells the story of lesbian life from the 1900s to today. Find it here.

98. Century of Struggle: The Women’s Rights Movement in the United States
by Eleanor Flexner
Belknap Press, 1959, 1975, 1996
Betty Friedan called this classic history of the women’s suffrage movement “a book to be read by every student in this country. … This account will help us to maintain a truer image of ourselves as we try to finish up the struggle first launched so long ago.” Find it here.

97. Bitches, Bimbos, and Ballbreakers: The Guerrilla Girls’ Illustrated Guide to Female Stereotypes
by Guerilla Girls
Penguin Books, 2003
Through illustrations, wisecracks and satire, the Guerilla Girls explore and de-tooth the stereotypes that women have faced through the ages. Find it here.

96. In a Different Voice: Psychological Theory and Women’s Development
by Carol Gilligan
Harvard University Press, 1982
In a correction of moral psychology’s persistent misunderstandings of women, Gilligan “flips old prejudices against women on their ears. She reframes qualities regarded as women’s weaknesses and shows them to be human strengths,” said Amy Gross in Vogue. Find it here.

95. Mysteries of the Middle Ages: The Rise of Feminism, Science & Art from the Cults of Catholic Europe
by Thomas Cahill
Nan A. Talese, 2006
Cahill’s provocative popular history argues that the Church’s veneration of the Virgin Mary in the Middle Ages ushered in a new age of valuation of women. Find it here.

93. James Tiptree, Jr.: The Double Life of Alice B. Sheldon
by Julie Phillips
St. Martin’s Press, 2006
A well-researched, sympathetic portrayal of the life of Alice B. Sheldon, who wrote award-winning feminist science fiction under the male pseudonym James Tiptree, Jr., fooling even close friends about her real identity. “The portrait that emerges captures a complicated woman who circumscribed assumptions of gender,” writes Anastasia Masurat of Bitch. Find it here.

92. Reading Women: How the Great Books of Feminism Changed My Life
by Stephanie Staal
Public Affairs, 2011
A journalist, wife and mother works her way through feminist classics such as The Feminine Mystique and The Second Sex, exploring their relevance in their own time, to her life and to the lives of young women today. Find it here.

91. Talking from 9 to 5: Women and Men at Work
by Deborah Tannen
William Morrow & Company, 1994
The famed linguist and author of You Just Don’t Understand takes on workplace communication, identifying the conversational rituals and styles that gender us in the business world. Find it here.

What do you think of these picks? What are your guesses for the top 10? We’ll be rolling out ten each day, and here’s a teaser for tomorrow: By strange coincidence, two books by two different (but both famous) black feminist authors have titles involving family members and vegetable-growing.