Women Immigrants Have Their Say About Georgia's HB 87 - Ms. Magazine
Skip to content 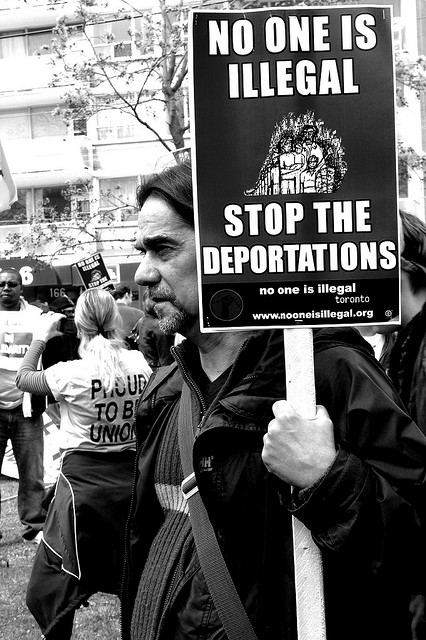 Claudia is an undocumented immigrant who moved to Georgia from Honduras in 2006. Shortly after arriving, she found herself in an abusive, violent relationship; her husband was able to control her in part by using the threat of deportation. She explained: “I was too scared to call the police. Would they arrest me or the person harassing me?”

Her worst fears became reality when law enforcement officials did arrest and deport her, separating her from her son. When she returned to try to apply for a visa, she was arrested again–this time after calling the police to protect her from her husband. Claudia is not only a victim of her husband’s abuse–she is also a victim of HB 87, the recently passed anti-immigration law in Georgia.

I was part of the We Belong Together Delegation of women leaders from around the country who traveled to Georgia this week to hear women such as Claudia testify about how HB 87 has affected their lives. The law, passed in May, has intensified surveillance of immigrant communities by authorizing local law enforcement officials, employers and social service providers to inquire about immigration status. It has created a Immigration Enforcement Review Board to investigate complaints of lack of government enforcement. It has levied heavy fines on individuals who are undocumented and has led to numerous arrests, detentions and deportations.

Our delegation went to witness; to listen to the voices of the undocumented; to hear the other side of the story of immigration. We were deeply moved by what we learned. HB 87, like similar immigration laws passed in other states, has had a devastating effect on women and children. When parents are detained or deported, families are torn apart. But the effect is further-reaching: Even those who are not detained by authorities have essentially been made prisoners in their own homes, afraid to go out for fear of being questioned. The law makes it impossible for individuals to work and support their families, or to seek out police protection or basic social services. People are quite simply living in a never-ending state of fear.

Take Lourdes, a mother of four who was unable to get health care for her U.S.-born daughter. Or Alicia, who is afraid to drive her 4-year old daughter to school–or to the hospital in emergencies–for fear of being stopped at a police checkpoint. Each shared her story and her pain with us.

Guadalupe testified on how the draconian law is changing the face of Georgia: People are leaving the state, apartments are vacant and businesses are closing. However, local groups such as the Georgia Latino Alliance for Human Rights have been organizing to support the undocumented in Georgia and raise awareness about their plight.

The We Belong Together Delegation was deeply moved by what we heard. In turn, we promised to carry these voices and stories to our own communities, as well as to policymakers in our nation’s capitol and across the country.

In solidarity with these women, we call on women everywhere to take the time to listen to these stories and to urge our nation’s leaders to end the inhumane policies that are tearing families apart.