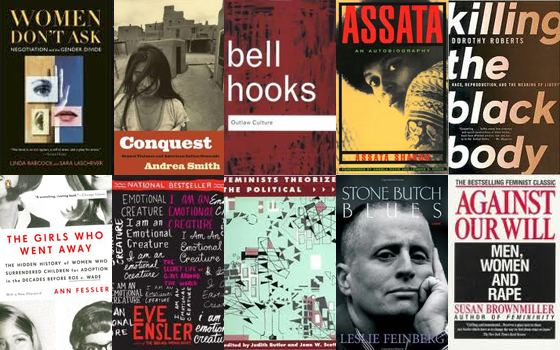 Books 70 to 61 take a darker turn, looking at some of the harsh realities of sexism, homophobia and racism. Here, writers take on rape, colonialism, wage disparities, racist reproductive injustice, and the hidden pre-Roe stories of women who gave up their children for adoption. But to start, two works by heavyweight feminist theorists that changed how we think about feminist theory.

70. Feminists Theorize the Political
by Judith Butler and Joan Wallach Scott, editors
Routledge, 1992
Written at the intersection of feminism and post-structuralism, this collection of work by leading feminist scholars sought to affirm that academic theory is of use to the feminist movement, arguing that it is politically rich and does not weaken feminism’s force for social change. Find it here.

69. Outlaw Culture
by bell hooks
Routledge, 1994
In a collection of 21 essays, hooks takes as her subject matter such cultural icons as Malcolm X, Camille Paglia, Naomi Wolf, Alice Walker, Whitney Houston and Kevin Costner (keep in mind, it was 1994!) Throughout, she affirms the importance of thinking about pop culture through lenses of gender, class, race, violence and patriarchy. Find it here.

68. Women Don’t Ask: Negotiation and the Gender Divide
by Linda Babcock and Sara Laschever
Princeton University Press, 2003
Relying on extensive psychological and economic research, Babcock and Laschever lay bare one factor behind the gendered wage gap: Men ask for what they want twice as often as women do and initiate negotiation four times more. Without victim-blaming, Babcock and Laschever go on to explore the culture forces behind these statistics and what women can do to reverse them. Find it here.

67. Killing the Black Body: Race, Reproduction, and the Meaning of Liberty
by Dorothy Roberts
Pantheon, 1997
Roberts, a law professor, examines an important and underrepresented segment of the battle for reproductive freedom: African American women. Roberts exposes how the myth of the “welfare queen” uses racism and sexism to curb black women’s reproductive rights, tying it to a long and often-violent history of racist reproductive disenfranchisement in the U.S. Find it here.

66. Stone Butch Blues
by Leslie Feinberg
Firbrand Books, 1993
We have a confession to make: This is a work of fiction that sneaked past the Ms. voters and the list editors. In fact, Feinberg‘s heartbreaking novel about a butch lesbian in pre-Stonewall New York is not autobiographical. Non-fiction purists may wish to read hir Transgender Warriors: Making History from Joan of Arc to Dennis Rodman instead. But Stone Butch Blues is full of little-told truths about what life was once like for butch/femme lesbians–brutalized by police, discriminated against by employers and yet shunned by lesbians and feminists. Find it here.

65. The Girls Who Went Away: The Hidden History of Women Who Surrendered Children for Adoption in the Decades Before Roe v. Wade
by Ann Fessler
The Penguin Press, 2006
Fessler, who was adopted herself, collects the untold oral histories of mostly white- and middle-class mothers who were pressured or forced to give up their children for adoption during the 1950s, ’60s, and ’70s–many of them young, unwed and unconvinced that they really wanted to part with their babies. Find it here.

64. Assata: An Autobiography
by Assata Shakur
Lawrence Hill Books, 1987
This is the life story of Shakur, who fought for black liberation and militant organizations in the 1960s and ’70s, and–after being convicted in 1977 of killing a highway patrol officer–documented the injustices she saw and suffered in prison. After escaping in 1979 she eventually gained political asylum in Cuba, where she wrote this stirring memoir. Find it here.

63. I am an Emotional Creature: The Secret Life of Girls Around the World
by Eve Ensler
Villard Books, 2010
From the woman who brought us The Vagina Monologues comes a collection inspired by interviews with girls and young women from around the globe. Rich local details undergird universal themes of sex, violence, love, body image, materialism, identity, family, friends and future. Find it here.

62. Conquest: Sexual Violence and American Indian Genocide
by Andrea Smith
South End Press, 2005
This defining work by Smith, renowned scholar of Native American studies and co-founder of INCITE! Women of Color Against Violence, brings to light the ongoing, rampant and unchecked sexual violence against Native American women, identifying it as both tool and a result of colonialism. Find it here.

61. Against Our Will: Men, Women, and Rape
by Susan Brownmiller
Simon and Schuster, 1975
Chosen as one of the New York Times Book Review’s Outstanding Books of the Year when it was published, this book changed the conversation about rape by defining it as a crime of power, not sex. Find it here.