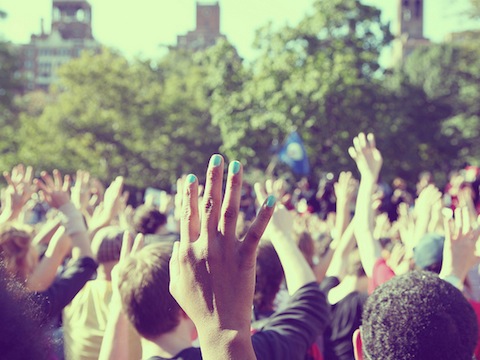 In Harry Potter and the Prisoner of Azkaban, students of magic battle a boggart, a creature that manifests itself as your worst nightmare. With a flick of their wand and the word “Riddikulus,” students disarm the boggart by turning it into a joke, thus rendering it powerless and nonthreatening. This is exactly what Steven Greenstreet, creator of the Hot Chicks of Occupy Wall Street tumblr is doing: By turning activist women into non-threatening “hot chicks,” he not only makes a mockery of their political struggle but also attempts to strip them of power.

In the same way that “ethnic” women are exoticized and fetishized, politically active “alternative” women are apparently the new hot thing. On Hot Chicks of Occupy Wall Street, you will find high-quality images of women with tattoos, nose studs, headscarves, asymmetrical haircuts and racial diversity. I asked Greenstreet if these women gave their consent to be photographed or for their images to be put online via Twitter, but received no response.

Many women have expressed their anger to Greenstreet over Twitter (he’s @MiddleofMayhem); he responds by asking if they want to talk about it over coffee. No, really.

Kudos to @mefunk for her response:

According to Jill Filipovic of Feministe, Greenstreet responded to her criticism by Google image-searching her and tweeting pictures of her in a dress she wore for a friend’s feminist eco-friendly fashion show with commentary like, “Oh I see, dressing in a short skirt and showing off your body to leering men is totally cool only when you do it” and “Love how these guys stare as you show off your curves.” Filipovic also discovered a rape joke Greenstreet made on his Facebook wall. It’s becoming more and more clear why Greenstreet’s “contribution” to #OccupyWallStreet took the form it did.

The simplest way to turn a powerful, activist woman into a nonthreatening woman is to sexualize her. When Greenstreet ventured to #OccupyWallStreet and found hundreds of assertive women demanding for economic equality, he ignored their message and neutralized their threat by essentially responding, “Oh yeah, talk protest to me baby.” This has the same effect as infantilization, another common way to diminish a woman: “Oh look, she’s protesting. Isn’t that cute?”

Greenstreet and his partner, Brandon Bloch, made this Hot Chicks of Wall Street video that, while admittedly beautiful and racially diverse, shows that he’s just as concerned with finding the “hottest” chicks as those with the most articulate views.

Even if we honor Greenstreet’s best intentions in this video—to showcase the women who inspired his interest and participation in the #Occupy movement—he’s making an implicit argument that these women’s messages only matter because they’re beautiful. What about the women who Greenstreet doesn’t find attractive? Do their words matter? #OccupyWallStreet is not, and should not be, a beauty contest, and “honoring” protesters for their beauty trivializes their struggle, their outrage and their contribution to the movement.

Apparently a lot of controversy has erupted online from people passionately opining (among many things) that this is sexist, offensive, and dangerously objectifies women. It was not my intent to do that and I think the spirit of the video, and the voices within, are honorable and inspiring. However, if you disagree with me, I encourage you to use that as an excuse to create constructive discussions about the issues you have. Because, to be honest, any excuse is a good excuse to bring up the topic of women’s rights.

At least we agree on something. Last week, Angi Becker Stevens wrote that we needed to create a feminist space within #OccupyWallStreet. This is a place to start.