Thanks to DOMA, Loving-and Parenting-From 5,000 Miles Away - Ms. Magazine
Skip to content 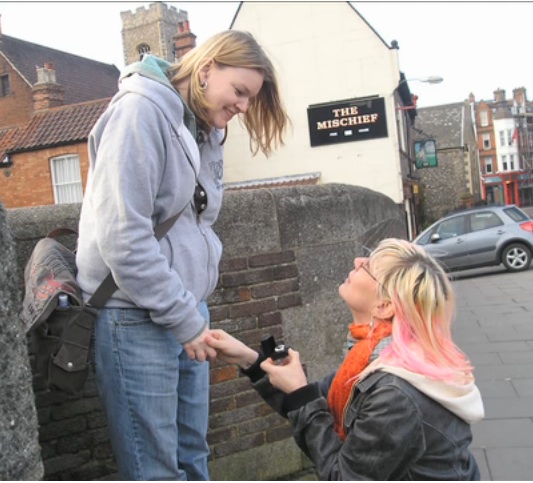 When massage therapist Inger Knudson and writer Philippa Judd held their Handfasting ceremony on Colorado’s Lookout Mountain a little over two years ago, they knew that their very personal act also held great political significance. The two women are raising a daughter together despite the fact that Philippa lives nearly 5,000 miles away, in England.

This living situation was not their choice.

“The years start to blur because we have to go back and forth,” said Inger in a phone interview. “We start to remember them mostly by trips.”

Inger and Philippa are one of 15 couples featured in Torn Apart: United by Love, Divided by Law, a new book by Judy Rickard that sets out to raise awareness of the unique challenges facing same-sex binational couples. Because gay marriages and partnerships are not recognized under federal law thanks to the Defense of Marriage Act–a Clinton-era law defining marriage as a union between a man and a woman–Americans cannot sponsor their same-sex partners for citizenship. That means that people in long term committed relationships, sometimes with children, can be divided by oceans.

Inger and Philippa met in 2008 and formed a quick friendship based on their shared passion for tattoo art. When Philippa came to visit, that relationship began to develop into something more.

“We got along surprisingly well,” Inger recalled. “My daughter just loved her.” With the eight-year-old’s blessing, they decided to make it official.

As of December, the family has spent a total of eight months together over a span of three and a half years.

Like many others in that situation, Judy Rickard has to travel across an ocean in order to be with her partner Karin Bogliolo. Karin had to return to England after her visa expired in 2008. In her book, Judy recounts their long-distance trips visit each other–trips the women, both over 60, never planned to take.

In fact, Judy never intended to write a book. “I was hoping that Elizabeth Gilbert would,” she said.

That wasn’t just a shot in the dark: The author of Eat, Pray, Love is an ally of the movement to reform immigration polices for same-sex couples, something Judy found out from a friend who attended one of Gilbert’s readings. But Judy decided to take the plunge and write the book herself, collecting stories from friends, people she found online, and people referred to her for the project. And later, she met Gilbert at an LGBT-marriage rights event held by advocacy organization Immigration Equality and convinced her to write the foreword.

For Erwin de Leon and Rev. John Beddingfield, another couple profiled in the book, the political aspect of marriage could not be avoided. The couple married in 2010 and have been together 13 years. De Leon is a doctoral student and columnist for Feet in 2 Worlds, as well as a contributor to WNYC’s It’s A Free Country and Huffington Post’s Gay Voices.

“If gay marriage had been allowed then, I would be a citizen by now,” said de Leon, who may face an untimely return to the Philippines when his Visa expires next year. And he has proof: Within six months after his mother married his stepfather in the United States, she was able to get a green card. As much as he loves his mother, he says, “there’s just something wrong there.”

The Respect for Marriage Act, would repeal DOMA, allowing same-sex couples the same marriage rights as anyone else. Until this act, or one like it, is signed into law, Inger and Philippa will be spending the holidays apart.

“It’s small things that are challenging, things that most people take for granted,” says Philippa. “You have a bad day and there’s no one to give you that much needed hug. Trips become built around not missing special occasions but inevitably that means you can’t do everything so we have to decide which are more important. Time difference means that everything has to wait unless it’s really urgent and we have to wake each other up in the middle of the night. I guess the biggest challenge is not being allowed to have any level of normalcy to a day.”

“There are still times when I turn to say something to Philippa and she’s not there, and your world just comes crashing down,” says Inger. “Of course, love has nothing to do with convenience. If it did, it wouldn’t be love.”

Sign here to urge the repeal of DOMA so that couples like Inger and Philippa be together:

A video of  Inger and Philippa by Kate Burns:

Still of Inger and Philippa from the above video.