Why the Reactionary Right Fears the Girl Scouts - Ms. Magazine
Skip to content

In 1924, James E. West, then the leader of the Boy Scouts of America, threatened to file suit against the Girl Scouts of America for patent violations over the word “scout.” For years, West had mounted an aggressive public relations campaign against the Girl Scouts, fearful that their ambitious program of outdoor education and community service would undermine the Boy Scouts. West believed that girls could only “guide,” and boys were loath to share the title of scout with girls. In 1918 Girls Scout National Board member Caroline Slade drafted a brief, but powerful response to West’s campaign:

I … urge that this name be not changed, as I feel that at this time, of all others in the history of the world, when we want the men and the women, the boys and the girls to put their shoulders to the wheel and to pull together for everything that means better citizenship.

If Slade were with us today, she would have some words for Indiana State Rep. Bob Morris (R-Fort Wayne), who was the only member of the Indiana legislature who refused to sign a resolution celebrating the Girl Scouts centennial, which is being commemorated in state-chapters nationwide. Morris accused the organization of promoting homosexuality and serving as a “tactical arm of Planned Parenthood.” Like West before him, Morris is among a long line of Girl Scouts attackers who hurl misinformation and empty accusations at the legions of Scouts and their many troop leaders—male and female—whose only crime is fulfilling the Scouts’ most recent mission of building girls of “courage, confidence and character.”

As a historian of girls and girlhood in America, I am never surprised by the bizarre and sexist lies that circulate around any group or movement devoted to elevating the status of girls and young women. Unlike the Camp Fire Girls and some areas of the the YWCA, who have since changed their focus from serving only girls, Girl Scouts remains a powerful organization devoted to highlighting and celebrating what girls can do in their communities and the world. Yet over the course of its 100 years, Girl Scouts have been charged with many of the crimes that feminists and activists have faced. There are crimes against gender (undermining femininity); crimes against patriotism (recklessly using khaki during wartime, hence the switch to green Girl Scouts uniforms); and crimes against the status quo (moving too fast on the issue of racial integration and not requiring girls to profess a belief in God when taking the Girl Scout Law).

Nothing angers sexists more than the visibility and success of girls and women. After a Texas Girl Scout troop attended a Planned Parenthood sex education event in 2004 and honored a local Planned Parenthood leader at an annual women’s leadership awards event, the anti-girl contingent pounced. Shortly after a call to boycott Girl Scout cookie sales in the area, the local story went national. The Girl Scouts’ then-CEO Kathy Cloninger appeared on NBC’s Today Show and mentioned Planned Parenthood as one of many organizations that partner with Girl Scouts. (Girl Scout councils are allowed to work with community organizations at their own discretion, and Girl Scouts must get parental consent to participate in any presentation or session about human sexuality). Though the national organization has no formal ties with Planned Parenthood and does not provide any curriculum for sex education, this minor incident was enough to fuel the campfire of the anti-girl troops.

The Girl Scouts of Colorado’s recent decision to accept transgender child Bobby Montoya as a Girl Scout also riled up the anti-girl camp. Though this decision led some to call for a boycott of Girl Scout cookies, the LGBT community countered with a cookie-buying campaign, and the scouts were still more than welcome on Capitol Hill this past February 1. Congressional members pledged to support the new ToGetHerThere initiative, which focuses on how adults can help girls become strong leaders. Women from both sides of the aisle are part of Troop Capitol Hill, including Rep. Debbie Wasserman Schultz (D-Fla.) and Sen. Susan Collins (R-Maine).

It is because Girl Scouts has such a long record of good work that it has been able weather the storms of social change. From its inception, Girl Scouts has employed women in leadership and administrative posts, promoted autonomy among its councils and remained open to assessing its relevance and commitment in a changing world. By resisting pressures from the James Wests and Bob Morris’ of the world, and instead letting the needs of girls dictate Girl Scout policy and programming, scouting has remained as relevant today as it was 100 years ago. 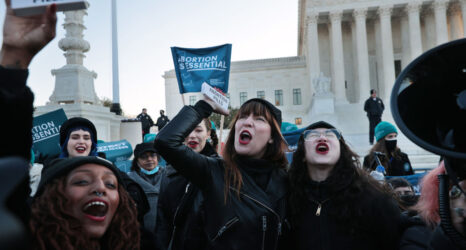