Where Are Men's Voices in the Fight for Women's Health? - Ms. Magazine
Skip to content 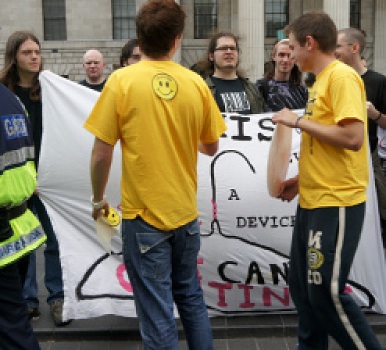 Now that the public outcry has died down over the Susan G. Komen for the Cure’s ill-advised and short-lived decision to defund Planned Parenthood, there’s time to consider men’s role in this and other recent women’s health controversies.

In the heated debates that have boiled up recently over birth control and abortion, the loudest male voices have once again been those who want to restrict women’s health care. An all-male panel of Catholic bishops and conservative men testified unanimously to Congress that women who work for Catholic employers should not have access to no-cost contraception. Fortunately, a White House compromise on birth control–to have insurance companies, not employers, foot the bill for birth control–caught the Right flatfooted.

Soon after that brouhaha, in an incredible overreach, the Virginia legislature proposed that women seeking abortions undergo a mandatory transvaginal ultrasound. Although he had a chorus of conservative male legislators lined up behind him, Virginia Gov. Bob McDonnell, a favorite of Pat Robertson, walked back his initial support of the bill. At Gov. McDonnell’s request, the Virginia legislature removed the transvaginal ultrasound mandate, and the bill has now passed.

What more encouragement do we men need to add our voices to a debate so vital to the lives of the women in our lives?

Unfathomable as it may be to many citizens, we’re likely to have more such debates in the near future. And the fact remains that men’s voices have been too few and too soft when it comes to speaking out about women’s breast health, birth control and abortion.

To me, it’s manly to speak out alongside our sisters and mothers, wives and daughters. Too much is at stake for men to stand mute while sideline blowhards go after the women in our lives–first their ovaries, then their mammary glands.

Consider the politics of the Komen situation–who isn’t in favor of breast health? On top of advocating for the women in our lives, men get breast cancer, too: My wife’s cousin David was diagnosed three years ago. It’s in men’s interest to acknowledge these are community issues, not women’s issues.

Last summer my wife and I joined our cousin for seven of the 60 miles he walked to Boston to raise money for the Komen foundation. At the end of our leg of the walk, we wrote a check to the Komen foundation in his honor. We were delighted he was two years cancer-free. And I said a prayer of gratitude for my wife–healthy and strong 21 years after her own bout with breast cancer.

But now, despite Komen reversing its decision to sever ties with Planned Parenthood, I am still angry that the foundation inserted politics into a nonpartisan issue–publicly working on behalf of one aspect of woman’s health while privately working against another. What if it were men’s health on the line instead of women’s? Would men stand silently by as other men introduced draconian legislation and clogged the airwaves and blogosphere pompously insisting that father knows best? Come on.

Too often, though, instead of speaking out on behalf of women’s rights, men remain bystanders. Are we fearful we’ll be put down, castigated as a mangina instead of celebrated as a mangina warrior? Remember the bumper sticker “Keep Your Laws Off of My Body?” It’s not just a slogan for women. Deep down, men know that an assault on women is an assault on us, too. But unless more of us are willing to raise our voices, we risk ending up like the boys who were banished to the back row of middle school chorus. You know, the ones who were ordered to mouth the words while the others sang.

I know it’s possible for men to sing out on these issues–as the editor of Voice Male magazine for the past 15 years, I witness them doing so every day. Want to know where you can start? A new initiative by Men for Women’s Choice has a series of action steps men can take in support of women’s health rights. There’s too much at stake to stay silent. It’s time to open up our mouths. It’s time to sing.