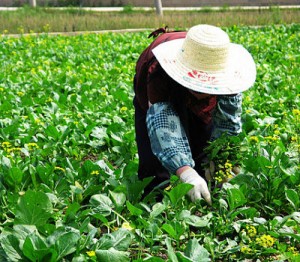 In the Masterpiece series Downton Abbey, Lady Mary Crawley, the eldest daughter of an Earl, cannot inherit the family estate because she is a woman. She finds this demeaning and frustrating, but her future will be well taken care of regardless. Sadly, this isn’t the case for millions of women around the world who struggle to access, own and inherit the tiny plots of land on which they live and work.

A gap-filled land registration system has meant that the country’s 700 million mostly poor and rural farmers, men and women, often lack the legal documents for the land on which they toil. Rapid urbanization has set in motion a pattern of “land grabs,” depriving an estimated three to four million farmers of their land every year. Of the few farmers that do have legal protection for their land, hardly any are women. Says Xiaobei Wang, a gender and land tenure specialist for Landesa,

Women in rural China are still in a vulnerable position. Most of them are not fully aware of their legal rights on land or the importance of including their names in legal documents, so they seldom assert their rights in land registration by requesting that their names be included.

These are timely findings given that a nascent land rights revolution in the country has begun. In late 2011, the continued struggles of dispossessed farmers came to a head with an historic village rebellion, signaling to the Chinese government and to the world that something finally had to change. Now, government officials are rolling out a massive initiative to register each plot of land with certificates of ownership in the hopes of protecting poor farmers.

It’s an effort that could dramatically transform China’s class and economic dynamics. Yet, so far, the planned overhaul does not include explicit efforts to include women or address women’s land rights struggles. Says Elisa Scalise, who directs Landesa’s Center for Women’s Land Rights,

There needs to be a clear legal framework for women’s property rights being recorded, and to guide practice there should be regulations which state specifically how that should happen. This should leave less discretion at the local level, where patriarchal beliefs [may guide] decisions.

The inaugural case of Landesa’s recently-opened Legal Aid Center in China involved the rights of three daughters to inherit their deceased parents’ land. They won, and Landesa hopes this sets a precedent.

Why are women so often left out in the cold when it comes to land rights, whether in Edwardian England of rural China? Worldwide, women produce an equal share of the food–and even more in regions such as Africa, where they produce 80 percent of food consumed by households. Yet women globally own only one to two percent of all titled land. And they’re rarely seen as owners and proprietors in their own right, but rather via a husband, father or brother. When that “via” disappears through divorce, death, or any other reason, women can lose their legal protection or land security.

Sometimes this is due to discriminatory laws that prevent their inheritance, and other times from oversight or neglect. It’s not only women who don’t know they have land rights, but government officials, land registrars and even the media. Case in point: How much of the recent coverage on China’s budding land rights revolution has included a mention of women’s land rights?

If you were to draw a Venn diagram of women’s empowerment efforts on the one hand, and land rights empowerment on the other, the place where they intersect would be occupied by a tiny cadre of organizations. The rights group Action Aid recently argued that “the Millennium Development Goal targets for tackling gender inequality are too narrowly focused, and omit critical issues such as women’s access to land.”

Landesa and others are working against the current, making the case that for many women–especially those in poor and rural areas–land ownership literally signifies having a space in the world, and a foundation on which to grow and develop. Says Xiaobei Wang,

Having a women’s name on the land title is often a huge game changer within a household and within a community. First and foremost, it provides a woman with a safety net. Secondly, it provides her with a say within the household and strengthens her ability to steer the proceeds from that land toward the needs of her children, including nutrition and education.

As the ancient Chinese proverb goes, “Women hold up half the sky.” Yet how can they if they do not even have a plot of land on which to stand?

Reprinted with permission from RH Reality Check . All rights reserved.