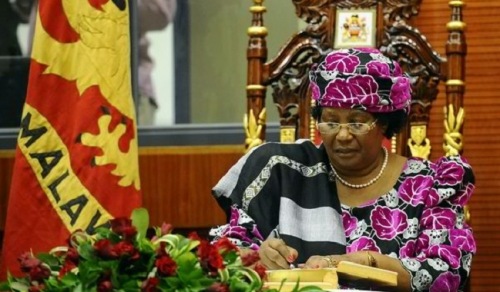 When rumors began to circulate last Thursday that the President of the Republic of Malawi, Bingu wa Mutharika, had died, there was serious concern Malawi would fall into political chaos with an undemocratic transfer of power to the late president’s brother.

So the majority of the country rejoiced last Saturday as Joyce Banda was sworn in as president of Malawi. She becomes Africa’s second woman head of state, and the first in southern Africa. Banda built her career as a tireless activist for women’s political and social empowerment and the protection of children. She is already being heralded as a symbol of hope and democracy for the region, with men and women alike celebrating her ascension to power. During her inauguration, the hall of Parliament erupted into joyous singing. Major national newspapers ran headlines such as “Democracy Triumphs in Malawi!”

Banda has long been a champion for the rights of women who believes that uplifting women will uplift the nation as a whole. As Banda explains below, her goals are to end gender-based violence, increase the number of women in Parliament, fight against HIV, promote family planning and encourage the economic empowerment of women.

Banda faced her own challenges on her way to national prominence. At 25 years old, she had three children and was in an abusive marriage. Inspired by the international women’s movement, she left her abusive husband and became a small business owner, starting a clothing store and a bakery. Banda saw her position as a way to help less privileged women, using the proceeds to send girls to school. Since that time, she has founded three major organizations to support the economic and social betterment of women’s lives in Malawi: the National Association of Business Women, the Young Women’s Leaders Network and the Joyce Banda Foundation.

She became a national figure in 2004 when she was appointed the Minister of Gender, Child Welfare and Community Services. In that position, she worked to get the hard-fought Domestic Violence Bill passed and designed two national campaigns in support of orphans and abused children. In 2006, she became the Minister of Foreign Affairs, and by 2009, she was the country’s first woman vice president. According to Banda, President Mutharika chose her as a running mate largely because of her commitment to women, who made up an estimated 70 percent of voters.

Soon after the election, however, Mutharika shut her out of meetings and maneuvered to have his brother declared his successor. When the people of Malawi sided with Banda, the president retaliated by expelling her from his ruling Democratic Progressive Party (DPP). She remained in her position because, under the Malawian Constitution, only Parliament can remove the vice president. Banda, in turn, founded her own political party, the People’s Party, based on “three cornerstones of unity, equity and development.”

As president, Banda has serious challenges ahead of her. She needs to address Malawi’s severe economic recession, gain enough Parliament support to pass her policies and win back the international monetary aid that was frozen due to her predecessor’s dictatorial rule. She also has critics, largely from the President Mutharika’s DPP, who question the people’s support of her because of her ouster from the DPP.

Banda has wasted no time facing these challenges. In her inaugural speech on Saturday, she cited economic growth and good governance practices as top priorities. On Monday she fired the Inspector General of Police, who has been accused human rights abuses against civilians. On Tuesday, she held a press conference where she announced renewed support from Great Britain and the United States.

Joyce Banda has been a beacon of hope for women in the Republic of Malawi for decades. Now, she stands to lift its citizens–women and men equally–toward democracy and a better future.

Photo of Banda being sworn in from Wikimedia Commons.