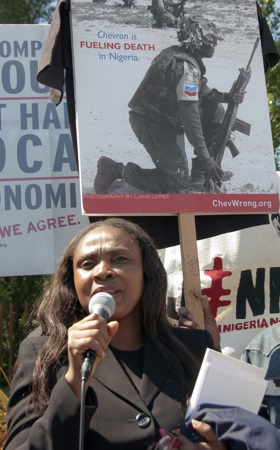 Last week, leaders of communities harmed by oil giant Chevron descended upon the company’s annual shareholder meeting in San Ramon, California to demand environmental justice and human rights. Participants from as far away as Angola, Ecuador, and Brazil joined with the True Cost of Chevron network (of which I am a part) and some 150 local protesters to decry Chevron’s abuses both around the globe and here in the U.S., from California to Texas to Washington, D.C.

One of the most prominent voices was Emem Okon (left), founder and executive director of Kebetkache Women Development & Resource Centre of Nigeria. A community organizer and women’s rights activist from the Niger Delta, Okon is leading a thriving Nigerian ecofeminist movement. She has coordinated several local women’s networks and coalitions, including Women Against Climate Change (WACC), International Network on Women and Environment, Niger Delta Women for Justice and Niger Delta Women’s Movement. I interviewed Okon shortly after the protests to learn how the women of the U.S. can emulate the women of Nigeria in standing up to one of the world’s most powerful–and dangerous–corporations.

Antonia Juhasz: Why did you travel from Nigeria to California to join the protests at Chevron’s annual shareholder meeting on May 30?

Emem Okon: For well over 50 years, Chevron has been a dominant oil producer in Nigeria, both on land and offshore, generating riches that have flowed to Chevron. Chevron’s operations in the Niger Delta have economically marginalized local villagers while giving them virtually no control over their own livelihood, land or resources. The people and communities living nearest to the oil have become poorer and more dispirited, and are living shorter lives. I came to California to tell Chevron that it must listen to the women of the Niger Delta and change its operations.

How are women’s lives in the Delta impacted by Chevron and the oil industry?

Abusing the Niger Delta environment translates to abusing the women of the Delta. These women are predominantly farmers and fisher-folks. Their lives are built around the environment. Their farming includes planting and processing cassava, yam, plantain, banana, vegetables and other related produce, as well as processing palm fruits into palm oil and palm kernel. Women also get resources from the forest. Their lives and income are also intimately linked to the water, including the Atlantic ocean, the rivers, streams and creeks. 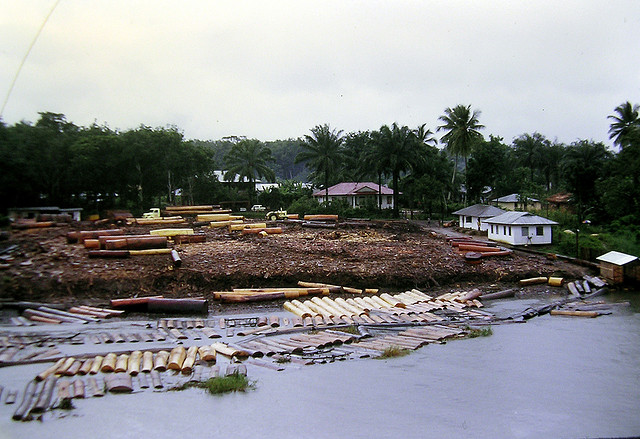 In the Niger Delta, the greatest damage to this environment is caused by the oil and gas industry. Through oil spills and gas flaring, exploration and exploitation activities have resulted in pollution of rivers, streams and creeks, making the water unsafe for aquatic life and leading to a loss of fishing income. Chevron spills oil into soil and farmlands, making them unfit for crops. Women, who are the majority of the informal [economic] sector, are negatively impacted as the oil halts their economic activities and increases their poverty.

There is also a social dimension to the impact of the extractive industry on women in the Niger Delta region. The oil politics have generated various forms of violent conflict in the Niger Delta, including communal clashes, youth armed gangsterism, chieftaincy tussle, political violence, militarism and militarization. These have subjected women to sexual violence, sexual slavery, rape and teenage pregnancy, as well as increasing child motherhood, sex work, HIV infection rates and trauma symptoms.

Gas flaring has also contributed to a high rate of maternal and child mortality [by causing] reproductive health issues such as infertility, miscarriages, stillbirths, cancers and respiratory problems.

How do the women of the Niger Delta respond to Chevron’s activities?

In the Niger Delta, women do not sit idle while such damage is done. We stand up and take action. The landmark achievement in women’s organizing was the Occupation of Chevron Oil Tank Farm in Escravos, Warri South West Local Government by Ugborodo women in July 2002. They succeeded in stopping work for 11 days, until Chevron’s management finally agreed to meet their demands. In so doing, Ugborodo women achieved in 11 days what the men could not achieve in decades. Chevron came down to talk with the women, which opened up the space for chiefs, youth leaders and government representatives to engage in the negotiation process.

International solidarity is key to achieving environmental justice and women’s rights in the Niger. The True Cost of Chevron network has been critical. Our greatest ally is the California-based non-profit Justice In Nigeria Now (JINN), which has led campaigns in the U.S. and mobilized other advocacy groups to support the Niger Delta women. I call on our supporters worldwide to join JINN on their website or their Facebook page.

Antonia Juhasz is an award-winning author and investigative journalist. A frequent Ms. contributor, her bylines include Rolling Stone, Harper’s Magazine, CNN, Newsweek and others. She is the author of three books, most recently, Black Tide: The Devastating Impact of the Gulf Oil Spill. She is a Bertha Fellow in Investigative Journalism. Follow her on Twitter— @AntoniaJuhasz—and learn more at www.AntoniaJuhasz.net.