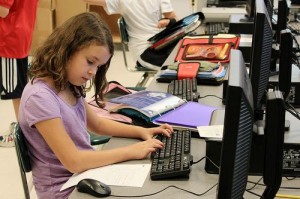 College campuses and high school hallways look vastly different today than they did 40 years ago. Gone are the gender-biased home-ec classes, “Mrs.” degrees and science lecture halls with one token female in attendance. In its place is the opportunity for education equity for girls and women at any and all points in their academic (and athletic) careers.

Title IX, which celebrates its 40th anniversary today, June 23, not only enabled but accelerated these advancements for women. Passed as a portion of the Education Amendments of 1972, Title IX prohibits sex discrimination in the education system by requiring equal access to all educational and athletic programs—bringing a wave of girls and women into programs that were de facto “male only.”

Since 1988, the number of women in post-baccalaureate programs has surpassed the number of men. Currently, women outnumber men at universities, earning 57 percent of conferred bachelor degrees and 60 percent of masters degrees. Girls continue to outperform boys in  elementary, middle school and high school classrooms, achieving parity in the math and science fields and exceeding boys in verbal skills. In athletics, the impact of Title IX was astounding: The number of girls playing interscholastic high school sports, for example, has grown from about 300,000 pre-Title IX to more than 3 million today.

But as Erin Buzuvis reports in the latest issue of Ms. magazine, the effects of Title IX, though promising, are not fully realized:

The numbers of women in higher education, particularly in law, medicine, business, veterinary and dentistry, have increased dramatically…[But] women students are still outnumbered in many of the so-called STEM fields (science, technology, engineering and mathematics), especially in doctoral degrees.

Women receive only 18 percent of undergraduate engineering degrees and 12 percent of doctoral degrees. These disheartening statistics migrate to women in the workforce, where women with undergraduate degrees earn $1.2 million less than their male college-educated equivalents over a lifetime. President Obama, who hosted a Title IX celebration at the White House on Wednesday in collaboration with the White House Council on Women and Girls, recently urged the 2012 class of Barnard College to “fight for a seat at the head of the table.” He was referring to the still-dismal presence of women on boards of directors, particularly in Fortune 500 companies and in areas such as technology.

Title IX has also faced a bevy of legal challenges over the years. As Buzuvis writes in Ms., the George W. Bush administration passed several pieces of legislation that jeopardized women’s academic and athletic equality. Although most of those policies were since reversed by the Obama administration, the Bush-era regulation that facilitated more single-sex public education in K-12—previously limited under Title IX—has ushered in a new wave of gender stereotyping and discrimination.

More than 500 schools have now implemented single-sex academic classes, many reflecting gender stereotypes. For example, at one middle school in Alabama, whose single-sex education program was successfully challenged by the ACLU, girls reportedly received an assignment in their language arts class to find as many words as possible to describe their dream wedding cake, while boys had to brainstorm action verbs used in sports.

As we celebrate the passage of Title IX this weekend, let’s also remember the struggle to end sex discrimination in education continues—and work to end it for future generations of girls.