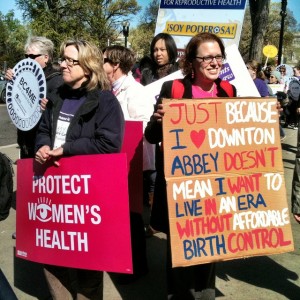 Religious freedom won’t be ringing for the seven states that attempted to curb access to no co-pay contraception.

U.S. District Judge Warren Urbom of Lincoln, Neb. dismissed a federal lawsuit today that challenged the Affordable Care Act’s HHS mandate, which requires health insurers to provide coverage of birth control, emergency contraception and sterilization. In line with most criticisms of the ACA, the lawsuit argued that the contraception mandate violated the so-called religious liberties of American citizens.

The lawsuit was filed by Nebraska Attorney General Jon Bruning along with the attorney generals of six other states: Florida, Michigan, Ohio, Oklahoma, South Carolina and Texas. Several Catholic-affiliated institutions were also listed as plaintiffs.

In his ruling, Urbom said everything we already knew: Religious freedom is a non-issue when it comes to the ACA and its HHS mandate.

Although the rule that lies at the heart of the plaintiffs’ complaint establishes a definitive, final definition of ‘religious employer,’ the ACA’s contraceptive coverage requirements are not being enforced against non-exempted religious organizations, and the rule is currently undergoing a process of amendment to accommodate these organizations.

The cry of religious freedom has been echoing around the country since President Obama signed the ACA in 2010. This seven-state lawsuit might be out, but 43 Catholic-affiliated institutions, including major universities such as Notre Dame, are still entangled in 12 separate lawsuits against the federal government. These lawsuits, which also specifically challenge contraception coverage, were led by numerous American bishops who have been relentlessly leading the fight against affordable and accessible birth control.